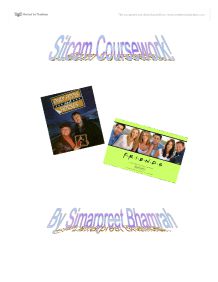 What is a Sitcom? * A sitcom is a genre of comedy program which originated in radio. It is short for 'situation comedy'. * Today, sitcoms are found almost exclusively on television, as one of its dominant narrative forms. Sitcoms usually consist of recurring characters in a common environment such as a home or workplace. * Like all genres, there are certain conventions that define a sitcom. * The best sitcoms take us on a journey where their characters and situations mirror the experience of life itself. Similarities sitcoms chare: * Most based on people who congregate in groups e.g. Friends (Monica, Rachel, Joey, Chandler, Ross and Phoebe) * Locations are based on same places e.g. coffee shop - Friends. Form/Structure: * Tend to be 24 to 30 minutes long. Narrative: * The narrative of a sitcom rarely continues from one episode to the next. Even in sitcoms that have ongoing storylines, each episode still tends to commence with a situation that has to be resolved by the end. ...read more.

Also, because they are cheap to make and can attract a large audience, the revenue from advertisements on commercial channels is attracted. Analysis of sitcom focusing on character Fawlty Towers is a British sitcom made by the BBC and first broadcast on BBC2 in 1975. Only twelve episodes were produced, but the series has had a lasting and powerful influence on later shows. Each episode lasted for 30 minutes and was broadcast weekly in two series of six episodes. The show is set in a fictional hotel 'Fawlty Towers' in the Devon town of Torquay. The hotel is owned and run by Basil and Sybil Fawlty: The episodes typically revolve around Basil Fawlty's efforts to succeed and his frustration at mistakes, both his own and those of others, which prevent him from doing so. Much of the humour comes from Basil's insulting and sometimes aggressive manner, engaging in angry but witty arguments with guests, staff and in particular his wife, who he addresses with insults such as "that golfing puff adder", "my little piranha fish," and "my little nest of vipers". ...read more.

British people are usually very warm, welcoming and a very forgiving country. One episode which stereotypes this is 'The Germans' in Fawlty Towers. Basil proceeds to mention the war at every opportunity, upsetting the German guests more and more as he rapidly descends into a fit of xenophobic ranting about everything and everyone that most Germans would rather forget. Basil is at his insensitive best (or should that be worst) but at least on this occasion he can blame a knock on the head for his behaviour! The line by Basil: "Don't mention the war!" has become one of those phrases from great British comedies that have become of common use. When the fed up German asks Basil to stop going on about the war, Basil kindly reminds him that they started it. "We did not start it," protests the German. "Yes you did, you invaded Poland", replies Basil! Basel represents britishness as he looks like a gentleman and his language is sophisticated. He also pretends that nothing is wrong and everything is fine. ?? ?? ?? ?? ...read more.