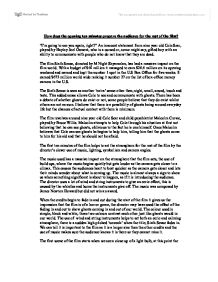 How does the opening ten minutes prepare the audience for the rest of the film? "I'm going to see you again, right?" An innocent statement from nine year old Cole Sear, played by Hayley Joel Osment, who is a cursed or, some might say, gifted boy with an ability to communicate with people who do not know that they are dead. The film Sixth Sense, directed by M Night Shyamalan, has had a massive impact on the film world. With a budget of $40 million it managed to earn $26.6 million on its opening weekend and earned and kept the number 1 spot in the U.S Box Office for five weeks. It earned $673 million world wide ranking it number 27 on the list of box-office money earners in the U.S. The Sixth Sense is seen as another 'extra' sense other then; sight, smell, sound, touch and taste. This added sense allows Cole to see and communicate with ghosts. There has been a debate of whether ghosts do exist or not, some people believe that they do exist whilst others are not as sure. I believe that there is a possibility of ghosts being around everyday life but the chances of actual contact with them is minimum. ...read more.

The director could of used the effect of putting Anna's and Malcolm's reflection in the glass as if to "frame" their last moment together in peace. The next scene in the bedroom/bathroom plays a key role for the rest of the film, it begins when we see Anna and Malcolm enter their bedroom both drunk. Malcolm turns on the bathroom light, this being the only light in this scene, which we find out has importance because it is where Vincent Grey awaits. Anna finds that the window has been smashed and the phone is broken, here we can see the fear gathering on her face. Suddenly a shadow flicks across the bathroom light causes Anna to scream out, the camera slowly begins to slide along the wall, this is called tracking, building up tension among the audience until it stops at the bathroom shocking the audience by revealing a near naked Vincent Grey. The fact that he's nearly naked shows us that he's been lowered to his most vulnerable point and he has nothing to protect him, not even clothes. Donnie Walberg, the actor that plays Vincent Grey is what is known as a method actor, he wanted to feel what Vincent would have felt during this scene so he starved himself, losing roughly forty pounds, to make himself feel more desperate so he could heighten his acting performance. ...read more.

Names have a huge significance in the film; Cole Sear's first name is a homophone of Coal. Coal is a sediment created when dead plants and animals are buried underground and heated under pressure. The director might have chosen this name for him because Cole is able to see dead people and must be under a lot of pressure because of this. His surname could be a homophone of seer, a seer is someone who has visions, Cole has constant visions of ghosts. Malcolm Crows surname has a hidden meaning as Crow is associated with death. Ironic considering in the majority of the film Malcolm was dead. Vincent Grey, Grey is created when you mix the colours black and white. Black is a colour often associated with death whilst white is a colour of life. The grey could mean he is in-between the life and death. The director cleverly used the characters names to hint at the fact that all the characters have been tainted by the spirit world. Overall M Night Shyamalan has used a large range of techniques to give the first ten minutes of the Sixth Sense an eerie, spooky and chilling atmosphere for the rest of the film. The mix of music, lighting and camera angles has helped to give it a creepy, jumpy feel that keeps the audience watching. Kyran-Storm Curry. ?? ?? ?? ?? ...read more.