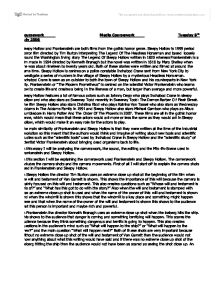 Sleepy Hollow and Frankenstein are both films from the gothic horror genre. Sleepy Hollow is 1999 period horror film directed by Tim Burton interpreting The Legend Of The Headless Horseman

Coursework Media Coursework Tuesday 8th July 2008 Sleepy Hollow and Frankenstein are both films from the gothic horror genre. Sleepy Hollow is 1999 period horror film directed by Tim Burton interpreting The Legend Of The Headless Horseman and based loosely around the Washington Irving story The Legend Of Sleepy Hollow written in 1820 whereas Frankenstein is a film made in 1994 directed by Kenneth Branagh but the novel was written in 1818 by Mary Shelley when she was about nineteen to twenty years old. Both of these stories were written and filmed at around the same time. Sleepy Hollow is centres on a police constable Inchabod Crane sent from New York City to investigate a series of murders in the village of Sleepy Hollow by a mysterious Headless Horseman. Inchabod Crane is seen as an outsider to both the town of Sleepy Hollow and his counterparts in New York City. Frankenstein or "The Modern Prometheus" is centred on the scientist Victor Frankenstein who learns how to create life and creates a being in the likeness of a man, but larger than average and more powerful. ...read more.