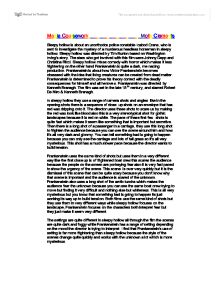 &quot;Sleepy Hollow&quot; and &quot;Frankenstein&quot; films compared. Both films frighten the audience by using the unknown and stereotypical gothic scenes.

Media Coursework Molly Clements Sleepy hollow is about an unorthodox police constable Icabod Crane, who is sent to investigate the mystery of a murderous headless horseman in sleepy hollow. Sleepy hollow was directed by Tim Burton based on Washington Irving's story. The stars who got involved with this film were Johnny Depp and Christina Ricci. Sleepy hollow mixes comedy with horror which makes it less frightening on the other hand Frankenstein is quite a dark, menacing production. Frankenstein is about how Victor Frankenstein becomes obsessed with the idea that living creatures can be created from dead matter. Frankenstein is determined to prove his theory correct with the deadly consequences for himself and all he loves. Frankenstein was directed by Kenneth Branagh. The film was set in the late 18th century, and starred Robert De Niro & Kenneth Branagh. In sleepy hollow they use a range of camera shots and angles like in the opening shots there is a sequence of close up shots on an envelope that has red wax dripping onto it. ...read more.

Both films use the same kind of shots but they use them in very different ways while sleepy hollow focuses on the landscape, Frankenstein focuses on the characters both interpret fear but they just make it seem very different. The settings are quite different in sleepy hollow all through the film the scenes are quite dark and foggy while Frankenstein has a range of setting depending on the mood the director is trying to interpret. I find that Frankenstein's use of setting is far more frightening than sleepy hollow because the style of the scenes change quite quickly and works with the unknown a lot which is more mysterious. In sleepy hollow the director uses a strange eerie angelic voice against dark and deep music to frighten the audience it's always a non-diegetic sound and you hear it mainly when something new and mysterious is coming into the film. The director mimics the gothic landscape here. The angelic voice is heard as crane walks into sleepy hollow. ...read more.

Costumes in Frankenstein are very different they are all very intricately detailed and quite pale colours but as the film gets darker so does the costumes. All through the film the make-up is very normal and the hair is left normally for the most part. There aren't really dead bodies but there is Frankenstein who has very realistic make-up and looks like somebody who is made out of bits and pieces. There aren't really props that repeatedly turn up in this film but the equipment victor uses is quite realistic. Both films are lit in the same way they are mainly lit by candles which created a gloomy atmosphere. Some scenes in both films are shot in darkness only being lit by light coming from the houses, the moon and sometimes lightning. This creates a very sinister atmosphere in both films. Both directors used the same techniques to scare us but portrayed them in very different ways. Sleepy hollow uses the gothic genre mixed with comedy while Frankenstein is more dark and sinister. Both films frighten the audience by using the unknown and stereotypical gothic scenes. These can scare the audience because they are dark and ominous. ...read more.