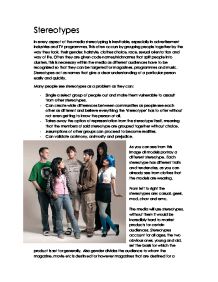 Stereotypes in the Media.

Stereotypes In every aspect of the media stereotyping is inevitable, especially in advertisement industries and TV programmes. This often occurs by grouping people together by the way they look, their gender, hairstyle, clothes choice, race, sexual orientation and way of life. Often they are given code names/nicknames that split people into clusters, this is necessary within the media as different audiences have to be recognized so that they can be targeted for magazines, programmes and music. Stereotypes act as names that give a clear understanding of a particular person easily and quickly. Many people see stereotypes as a problem as they can: - Single a select group of people out and make them vulnerable to assault from other stereotypes. - Can create wide differences between communities as people see each other as different and believe everything the 'stereotype' has to offer without not even getting to know the person at all. - Takes away the option of representation from the stereotype itself, meaning that the members of said stereotype are grouped together without choice. - Assumptions of other groups can proceed to become realities. - Can validate acrimony, animosity and prejudice. As you can see from this image all models portray a different stereotype. Each stereotype has different traits and tendencies, as you can already see from clothes that the models are wearing. ...read more.

In adverts promoting sport sportsmen are present instead of those who are not sporty to enhance the general image the audience will see, however a man who is not sporty can be shown next to a man who is, showing either a transformation or a contrast, usually asking the question of "who do you want to be?" An example of this is the recent Visa Europe: Football Evolution advert. In this advert a man is watching football and has sudden euphoria over a goal, he then runs from his chair, snatches his visa card and proceeds to run through town. From the advert we can gather that at the beginning the man represents many working class men who watch football regularly and are passionate about it without actually participating. This stereotype is often seen as lazy and loutish. The man continues to run, all around the world appearing in various countries and culture bases. With each shot he appears to lose weight, through constant running. He has changed clothes, as he is now thinner. The man eventually loses all of his weight and arrives at the game he was presumably watching at the start of the advert. He proceeds to kick the ball and score a goal, then celebrating before the adverts end. This advert is an example of a man who is of one particular stereotype transforming into a member of another stereotype. ...read more.

This can have impact on those watching reality TV with stars such as Katie Price and Janice Dickinson as young girls may then want to have superfluous surgery to look different. Reality TV provides the public with figures who are irresponsible and do not care for the impression they create on young people. Hyperreality within Stereotypes (Insignificance without society) Hyperreality is where the society sees something as more than it actually is. A king may wear a crown to signify that he is all-knowing and the ruler of a country, the crown itself is made of simple metals and is meaningless, but because society has made the crown a symbol of the king it is important. Hyperreality is where reality itself is made, by society, more than it actually is. Jeffree star is an example of a hyperreal person; he is constantly plastic-looking and false. This is a man who uses cosmetics, wigs and photographic enhancements to create a false sense of beauty that was not present in the first place. Jeffree star uses every aspect of his facial features in a bid to appear fake, the illusion he creates is thought of by the audience as being different an exciting when it is entirely destructive to others who wish to be the same as him. People who embrace Hyperreality are often unable to accept themselves at all and others around them, they often have addictive personalities that lead to excessive use of cosmetics. ...read more.