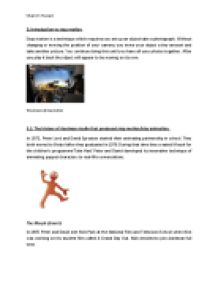 Stop Motion Animation - the success of the Aardman studio's films.

﻿Shaznim Hussain 3: Introduction to stop motion Stop motion is a technique which requires you set up an object take a photograph. Without changing or moving the position of your camera, you move your object a tiny amount and take another picture. You continue doing this until you have all your photos together. After you play it back the object will appear to be moving on its own. The process of stop motion 3.1: The history of Aardman studio that produced stop motion/clay animation. In 1972, Peter Lord and David Sproxton started their animating partnership in school. They both moved to Bristol after they graduated in 1976.During that time they created Morph for the children?s programme?Take Hart?.Peter and David developed its innovative technique of animating puppet characters to real-life-conversations. The Morph (Smart) In 1985 Peter and David met Nick Park at the National Film and Television School when Nick was working on his student film called A Grand Day Out. Nick decided to join Aardman full time. A Grand Day Out In 1986, Peter Gabriel wanted to collaborate with the director Stephen Johnson and the brothers Quay to make a rock video called Sledgehammer. Sledgehammer went on to collect many awards that year. ...read more.

Another more-complex variation on stop motion is go motion developed by Phil Tippett who is a movie director and an award-winning visual effects supervisor and producer, who specializes in creature design and character animation. Go motion was first used on the films The Empire Strikes Back which was released in 1980 and Dragonslayer which was released in 1981 and also the Robocop films. Go motion involved programming a computer to move parts of a model slightly during each exposure of each frame of film, combined with old-fashioned hand manipulation of the model in between frames, to produce a more lifelike motion blurring effect? Stop-motion has changed dramatically since the early 20th century, In fact, stop motion is rarely used anymore, only in children?s tv shows.With the development of digital 3D animation, animating a 3D character in a film has become faster and easier, which is favored by industry,3D animation allows unreal characters to seem to be alive 3.3: Key animators and their creations A Nick Park was an English filmmaker of stop motion he was known best as the creator of Wallace and Gromit. Wallace and Gromit were produced using the stop motion method. The frames of movies were shot one at a time, changing the position of the models of the characters slightly to give the impression of movement in the final film. ...read more.