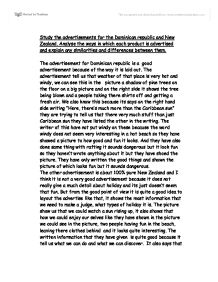 Study the advertisements for the Dominican republic and New Zealand. Analyse the ways in which each product is advertised and explain any similarities and differences between them.

Study the advertisements for the Dominican republic and New Zealand. Analyse the ways in which each product is advertised and explain any similarities and differences between them. The advertisement for Dominican republic is a good advertisement because of the way it is laid out. The advertisement tell us that weather of that place is very hot and windy, we can see this in the picture a shadow of pine trees on the floor on a big picture and on the right side it shows the tree being blown and a people taking there shirts off and getting a fresh air. We also know this because its says on the right hand side writing "Here, there's much more than the Caribbean sun" they are trying to tell us that there very much stuff than just Caribbean sun they have listed the other in the writing. The writer of this have not put windy on these because the word windy does not seem very interesting in a hot beach so they have showed a picture to how good and fun it looks. ...read more.

have told us that we would have sense of freedom and this is what every people wants on a holiday, because they are so tired going to work and at home. They go on holiday to have free time so when they say that sense of freedom it would probably mean free time to them. It also says that we can do the things that we have wanted and thing that we have never dreamed of doing at home, so it is trying to tell us that we can do what ever we want that we wanted to do at home and the thing that you have always wanted in this holiday so I think this is quite a good sentence to persuade people to go on this holiday. The other difference that I think they have is about the colour one of them is dull sun rising up and other on is sunny and some times windy in the small pictures. I think this would not effect in people very much because both looks interesting. ...read more.

It says we could but it doesn't really say that we could be able to do this so to find out if they would be able to do the things that they have wanted and dreamed of. They would have to go on that holiday so I think this would persuade most of the people because every one have dreams and they would love to fulfill them. In the other poster they have gave us the most of the information that we need, the activities that we would be able to do and what are the weathers like and how is the place that the people are going to be living on. So they would have no questions to ask for them selves the people that would like water sports would go there because it shows that we can. This is the best ways to let people know what they would be able to do at holidays the water sports looks dangerous but it also seems fun so this would persuade all the people that would like to do water sports and wanted to have a go at them. This is why I think the Dominican republic poster is better. ...read more.