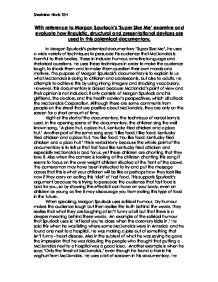 With reference to Morgan Spurlock's 'Super Size Me' examine and evaluate how linguistic, structural and presentational devices are used in this polemical documentary. In Morgan Spurlock's polemical documentary 'Super Size Me', he uses a wide variety of techniques to persuade his audience that McDonalds is harmful to their bodies. These in include: humour, emotive language and rhetorical questions. He uses these techniques in order to make the audience laugh, to shock them and to make them question their own morals and motives. The purpose of Morgan Spurlock's documentary is to explain to us what McDonalds is doing to children and adolescents, but also to adults. He attempts to achieve this by using strong imagery and shocking vocabulary. However, this documentary is biased because McDonald's point of view and their opinion is not included; it only consists of Morgan Spurlock and his girlfriend, the doctors, and the health advisor's perspectives, which all attack the McDonalds Corporation. Although there are some comments from people on the street that are positive about McDonalds, they are only on the screen for a short amount of time. Right at the start of the documentary, the technique of verbal irony is used. In the opening scene of the documentary, the children sing the well known song, 'A pizza hut, a pizza hut, Kentucky fried chicken and a pizza hut.' Another part of the same song says: 'I like food! ...read more.

It is very hard to keep your entire body that perfectly healthy and also taking into count that he doesn't eat meat or eggs so he wouldn't get the right amount of iron and protein unless he takes a supplement. His results are more than likely not to be true. As this documentary is biased we cannot be completely sure that those results are actually his. They may have embellished the results to make the contrast between the results at the start of the experiment and the results during and at the end of the experiment more shocking and more drastic. They may have done this to show the severe health defects that can be obtained from eating too much fast food or to shock the audience into submission, which means they will not eat McDonalds to any further extent. When talking about McDonalds, its food and its effects on his body he uses plays on words better known as puns. He says: 'You know when you got the McGurgles going and the McTingles well I've got the McStomachache'. This is a pun on the word McDonalds as he takes the 'Mc' prefix in the word McDonalds and places it before words that describe what McDonalds is doing to him. These plays on words or puns are appealing to the audience because it makes them laugh. ...read more.

Parallelisms are used several times in this documentary. Two examples are: 'The consumers are paying not just with dollars, but with their waistlines as well.' Also, 'everything's bigger in America ... the biggest food, a finally the biggest people.' Using parallelisms enables Spurlock to place negative alongside the positives of America and McDonalds, showing contrasts within one sentence. This technique worked quite well as these kinds of sentences are easy to remember, so the audience we be left remembering the positives but also the negatives that McDonalds can bring. To conclude, Morgan Spurlock uses a large amount of linguistic, structural and presentational devices to persuade and explain his point that McDonalds is bad for you to his audience. He uses a number of different techniques under each category which all help him to achieve the purpose of his documentary which was explained earlier on in this evaluation of the devices used in the polemical documentary 'Super Size Me'. However, not all of his techniques were successful as we could see through his superfluities of the truth. Although he was ineffective in some of the devices he tried to use, the majority of them were successful and he managed to persuade the audience to some effect even though he did not manage to persuade me. Spurlock uses presentational and structural devices very well but his linguistic devices that are used to try and persuade the audience to be anti-McDonalds weren't very effective. ?? ?? ?? ?? Sherlaine Hinds 10H ...read more.