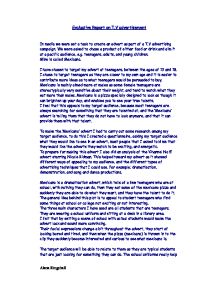 Evaluative Report on T.V advertisement In media we were set a task to create an advert as part of a T.V advertising campaign. We were asked to chose a product of either food or drink and aim it at a pacific audience, e.g. teenagers, adults, and young children. Mine is called Mexicano. I have chosen to target my advert at teenagers, between the ages of 13 and 18. I chose to target teenagers as they are closer to my own age and it is easier to contribute more ideas as to what teenagers would be persuaded to buy. Mexicano is mainly aimed more at males as some female teenagers are stereotypically very sensitive about their weight, and tend to watch what they eat more than males. Mexicano is a pizza specially designed to look as though it can brighten up your day, and enables you to see your true talents. I feel that this appeals to my target audience, because most teenagers are always searching for something that they are talented ...read more.

The general idea behind this plot is to appeal to student teenagers who find some things at school or college not exciting or not interesting. The three main characters I have used are all students that are teenagers. They are wearing a school uniform and sitting at a desk in a library area. I felt that by setting a scene of school with actual students would make the advert look and sound more convincing. Their facial expressions change a bit throughout the advert, they start of looking bored and tired, and then when the pizza (mexicano) is thrown in to the clip they suddenly become interested and curious to see what mexicano is. The target audience will be able to relate to them as they are typical students that are just looking for something they can do. The school uniforms really help to create an authentic look, and by the actual characters being teenagers themselves the audience will feel that they are being told the truth about the product they are being told to buy. ...read more.

When the section after they find the mexicano pizza starts the camera automatically begins tracking the basket ball players, while also using extreme long shots. By using shots like these it shows the audience only what they need to see of our advert. I have decided that this advert will be aired on channel four, between 4 and 10pm and also on trouble between 4 and 10pm. These channels have been chosen because they are popular channels for my target audience. And I have chosen these times as they are more convenient for teenagers just coming in from school or college and needing to relax. Therefore there will be more of my target audience watching. I do not feel that my advert was as successful as it could have been, there were too many different subjects of genre that we had tried to put together, and it did not look right. The overall result could have been a lot better and we could have changed the editing and some of the shots to introduce some excitement and interesting shots in to the advert. Alana Ringshall ...read more.