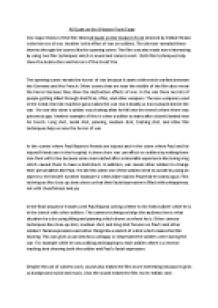 Transfer-Encoding: chunked ﻿All Quiet on the Western Front Essay One major theme of the film titled All Quiet on the Western Front directed by Delbert Mann is the horrors of war. Another is the effect of war on soldiers. The director revealed these themes through the scenes like the opening scene. The film was also made more interesting by using two film techniques which is sound and camera work. Both film techniques help show the destruction and horrors of the Great War. The opening scene reveals the horror of war because it starts with trench warfare between the Germans and the French. Other scenes that are near the middle of the film also reveal the horror because they show the destructive effects of war. In the war there are lots of people getting killed through shell fires, rifles, and other weapons. ...read more.

We see this when one of the soldiers tried to suicide by using an object to hit himself. Another example is when Albert said to Paul that he wants a gun. Film techniques like close up shots show us that their facial expression is filled with unhappiness, not with cheerfulness and joy. In the final sequence it starts with Paul Bauma writing a letter to his friend Albert while he is in the trench with other soldiers. The camera techniques helps the audience know what situation he is by using tilting and panning which shows us where he is. Other camera techniques like close-up shot, medium shot, and long shot focuses on Paul?s and other soldiers? facial expressions and other things like a sketch of a bird which makes the film exciting. ...read more.

In the Great War, lots of soldiers died in various ways. Some soldiers got a shell shock after the war. Horrors of war show us that war is very destructive and dangerous. Next, the war mostly changes soldiers in a miserable way. The director used the opening scenes and other scenes to reveal the themes. In addition, the film techniques make the film more realistic and enjoyable. It achieves this using music, panning shot, tracking shot, and other sound and camera work which illustrate the drama by capturing our emotions. Other than that, these camera techniques also help convey horrors of war and how war affected soldiers, and other themes. Therefore, the sound and camera work makes the final sequence of the film more interesting. Also, the two major themes are horrors of war and the effect of war on soldiers. ...read more.