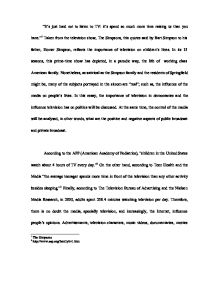 Television and its effects and importance to, children

"It's just hard not to listen to TV: it's spend so much more time raising us than you have."1 Taken from the television show, The Simpsons, this quotes said by Bart Simpson to his father, Homer Simpson, reflects the importance of television on children's lives. In its 15 seasons, this prime-time show has depicted, in a parodic way, the life of working class American family. Nonetheless, as satirical as the Simpson family and the residents of Springfield might be, many of the subjects portrayed in the sitcom are "real"; such as, the influence of the media on people's lives. In this essay, the importance of television in democracies and the influence television has on politics will be discussed. At the same time, the control of the media will be analysed, in other words, what are the positive and negative aspects of public broadcast and private broadcast. According to the APP (American Academy of Pediatrics), "children in the United States watch about 4 hours of TV every day."2 On the other hand, according to Teen Health and the Media "the average teenager spends more time in front of the television than any other activity besides sleeping."3 Finally, according to The Television Bureau of Advertising and the Nielsen Media Research, in 2003, adults spent 258.4 minutes watching television per day. ...read more.

These four types of activities have become essential to politics. "Public relations, as managed by the so-called "spin doctors," whose job is to release news stories to, and answer form, print and electronic reporters. Insiders refer to the world of daily news coverage as the unpaid media."(Dickerson and Flanagan: 418). On the other hand, paid media consist on advertisements paid by political parties. The commercials are carefully done, studied and prepared and their efficiency is measured. Public opinion polls are have very important. There are seven main types of polls which are frequently used in election campaigns (the bench-mark study, the follow-up survey, omnibus polls, panel surveys, tracking, the riding study and focus groups); however, many times, polls are used by the candidates to promote themselves or to misguide the voters. Finally, direct mail is advertisement send to the voters via mail. However, there is one more type of media politics. Unpaid media has become very important in political campaigns. Televised presidential debates like the ones in the United States or televised prime-ministerial debates like the ones in Canada play an essential part in political campaigns. The debates are important because they address the general public and; in many cases, the debates "help" the indecisive voters decide who they will vote for. ...read more.

However, the media can also damage or twist information, in order to, increase their ratings. Television in democracies has a crucial role because it helps and gives the viewer a chance to decide who they might vote for. Also, it provides the citizen with the different choices they have and non-biased journalists and broadcaster allow individuals to understand and follow the political process. Therefore, broadcasting is very important for politicians. Nevertheless, public-owned media companies and private-owned corporations "shape" people's attitude towards politics. Public-owned media in Canada is not as influential as it was (or is) in another countries; but, private-owned corporation have a monopoly over the Canadian media. Although it is essential in democratic countries to have non-governmental media institutions, the state is right to control and regulate the private companies in order to maintain some kind of order in the media. Moreover, media is here to stay, specially advertisement. Nonetheless, if the state would regulate political campaign advertisement, for example, forcing the candidates to give accurate data about their opponents, would political commercials have the same effect on the voters or would voters be more likely to find information about their candidate of choice in more reliable sources? 1 The Simpsons 2 http://www.aap.org/family/tv1.htm 3 http://depts.washington.edu/thmedia/view.cgi?section=medialiteracy&page=fastfacts 4 http://tv.yahoo.com/nielsen/ 5 http://www.suntimes.com/output/elect/cst-spt-debate15.html 6 http://www.eim.de/Events/Downloads/CJBEngdoc-final.pdf 7 http://www.aber.ac.uk/media/Documents/marxism/marxism05.html 8 http://www.med.sc.edu:1081/misleadingads.htm 9 http://www.cbc.ca/news/indepth/background/mediaownership.html 10 http://www.cbc.ca/stories/2002/11/27/media_ownership021127 ...read more.