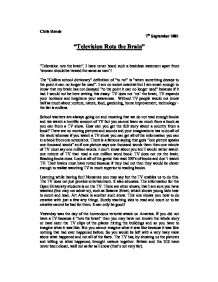 Chris Rands 7th September 2001 "Television Rots the Brain" "Television rots the brain". I have never heard such a brainless statement apart from 'women should be treated the same as men'! The "Collins school dictionary" definition of "to rot" is "when something decays to the point it can no longer be used". I am no rocket scientist but I am smart enough to know that my brain has not decayed "to the point it can no longer used" because if it had I would not be here writing this essay. TV does not 'rot' the brain, TV expands your horizons and heightens your awareness. Without TV people would not know half as much about: culture, nature, food, gardening, home improvement, technology -the list is endless. School teachers are always going on and moaning that we do not read enough books and we watch a horrific amount of TV but you cannot learn as much from a book as you can from a TV show. ...read more.

It can only be good! Yesterday was the day of the horrendous terrorist attack on America. If you did not have a TV because it "rots the brain" then you may have not known the whole story or have seen the TV clips of the planes hitting the buildings and so you have to imagine what it was like. But you cannot imagine what it was like because it was like nothing that had ever happened before. So you would be left with a very hazy view about what happened and not all of the facts. The TV has, by showing us the pictures and telling us what happened, brought nations together. Britain and the U.S have never been closer, well not as far as I know (that's not very far). What could be better than coming home from a hard day's work and relaxing with a drink, preferably alcoholic, some chocolate and watching TV? ...read more.

The Olympics is just about the biggest sporting event there is and without a TV you would not be able to see it. (Unless you have a very fat wallet and could see it live. But not many people can do that.) You would have to listen to a biased commentator talking all the time about the biggest sporting event there is. You can't make your own judgements about the performance because you are an idiot and don't have a TV because it 'rots the brain'. As far as this statement goes it is complete and utter drivel. As I have proved, TV is by far and away superior to any other form of entertainment, apart from certain other live shows only open to those who are 18 years and above. It does not 'rot' the brain, it expands it, totally the opposite. Of course if you watch such rubbish like 'Home and Away' or 'Neighbours' it is to our detriment but if we watch TV in moderation then it will only improve us as a person. ...read more.