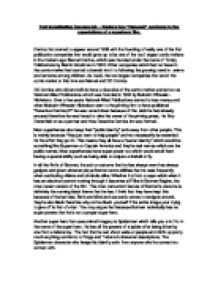 Text Investigation Coursework Explore how Hancock conforms to the expectations of a superhero film.

Text Investigation Coursework - Explore how "Hancock" conforms to the expectations of a superhero film. Comics first started to appear around 1930 with the founding of really one of the first publication companies that would grow up to be one of the two largest comic makers in the modern age: Marvel Comics, which was founded under the name of Timely Publications by Martin Goodman in 1933. Other companies which had not been in the comic market had started to branch into it to following the growing trend in anime and cartoons among children. As I said, the two largest companies that are in the comic market at this time are Marvel and DC Comics. DC Comics who did and still do have a nice slice of the comic market started out as National Allied Publications which was founded in 1934 by Malcolm Wheeler-Nicholson. Over a few years National Allied Publications started to lose money and when Malcolm Wheeler-Nicholson went to the printing firm to have published "Detective Comics #1" he was turned down because of the debt he had already aroused therefore he was forced to take the owner of the printing press, Ha5rry Donenfeld on as a partner and thus Detective Comics Inc was formed. ...read more.

Everybody remembers Walter the great whale, he was stuck on the beach. Along comes Hancock." And Hancock replies with, "I don't even remember that." Ray Embrey Finishes with, "Ah, well... Greenpeace does. ". That the sort of dry humor that the film has where most other superhero films do not include. Most superhero films such as Spiderman or Ironman are much more serious, dark and sinister however the film Hancock loosens a rather Elizabethan view of superhero films which I believe makes it much nicer to watch. Mainly because, the added comedy is a welcome freshness from the usual: kidnapping, killing and villainy that goes on some much in superhero films nor does the film Hancock has a super villain to co-exist with Hancock. Hancock is clearly uncomfortable with his new superhero identity mainly because he has been so long living as a complete tramp that he has almost forgotten how to interact with any other person of the human race. "Good job! Do I have permission to touch your body?" Hancock says to a police women, "It's not sexual. Not that you're not an attractive woman. You're actually a very attractive woman and..." He continues on after a short and reply from the women, she the finishes there convosation with. ...read more.

background helping the superhero function in their fantasy and normal lives; Helper, last but definitely not least the helper or the side-kick is the person that 'helps' the superhero in the encounters that he or she faces, usually the side-kick is a man along with the superhero. The Hancock film does agree with Todorov's story theory, the equilibrium of Hancock is the beginning half hour where you really get to see what sort of a person the Hancock character is at that stage in the film, a drunk, homeless waster that does nothing. The disruption is in my opinion where Hancock tries to help someone but in doing so creates even more havoc than if he had just left it (The train and car scene.). In conclusion, I believe that the Hancock film does not follow the rules of a usual superhero film however there are some aspects that I believe allow it to make up for the things it loses such as humour which makes the film a lot more watchable by a wider audience. The one thing that the film does actually agree with is the Propp and Todorov's character and story types which not surprisingly are followed quite closely. All together the film is a good one to watch and definitely a recommendable film for teenage plus audiences. ?? ?? ?? ?? ...read more.