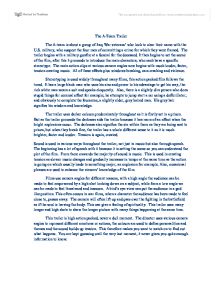 The A-Team Trailer. The trailer begins with a military gunfire at a funeral for the deceased. It then begins to set the scene of the film, after this it proceeds to introduce the main characters; who each have a specific stereotype.

The A-Team Trailer The A-team is about a group of Iraq War veterans' who look to clear their name with the U.S. military, who suspect the four men of committing a crime for which they were framed. The trailer begins with a military gunfire at a funeral for the deceased. It then begins to set the scene of the film, after this it proceeds to introduce the main characters; who each have a specific stereotype. The main action clips at various camera angles now begins with much louder, faster, tension creating music. All of these effects plus windows breaking, cars crashing and violence. Stereotyping is used widely throughout many films; this action packed film follows the trend. ...read more.

But as the trailer proceeds the darkness aids the trailer because it has more of an effect when the bright explosions occur. The darkness also signifies the sin within them as they are being sent to prison, but when they break free, the trailer has a whole different sense to it as it is much brighter, faster and louder. Tension is again, created. Sound is used in various ways throughout the trailer; not just in music but also through speech. The beginning has a lot of speech with it because it is setting the scene so you can understand the plot of the film. From there onwards the majority of sound is music. ...read more.

This often occurs in war films, when a character the audience has been made to feel close to, passes away. The camera will often lift up and pass over the fighting in the battlefield as if the soul is leaving the body. This can give a feeling of spirituality. This trailer uses many longer and high shots to show the longer picture with many things happening at the same time. This trailer is high action packed, never a dull moment. The director uses various camera angles to represent different emotions or actions, the colours are used to define personalities and themes and the sound builds up tension. This therefore makes you want to watch on to find out what happens. You are kept guessing until the very last moment, it never gives you quite enough information to know. ?? ?? ?? ?? ...read more.