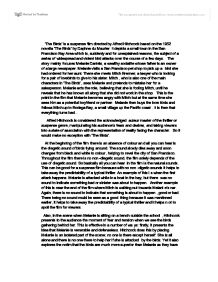 The Birds is a suspense film directed by Alfred Hitchcock based on the 1952 novella The Birds by Daphne du Maurier.

'The Birds' is a suspense film directed by Alfred Hitchcock based on the 1952 novella 'The Birds' by Daphne du Maurier. It depicts a small town in the San Francisco Bay Area which is, suddenly and for unexplained reasons, the subject of a series of widespread and violent bird attacks over the course of a few days. The story mainly focuses Melanie Daniels, a wealthy socialite whose father is an owner of a large newspaper. Melanie visits a San Francisco pet shop to pick up a bird she had ordered for her aunt. There she meets Mitch Brenner, a lawyer who is looking for a pair of lovebirds to give to his sister. Mitch, who is also one of the main characters in 'The Birds', sees Melanie and pretends to mistake her for a salesperson. Melanie acts the role, believing that she is fooling Mitch, until he reveals that he has known all along that she did not work in the shop. This is the point in the film that Melanie becomes angry with Mitch but at the same time she sees him as a potential boyfriend or partner. Melanie then buys the love birds and follows Mitch up to Bodega Bay, a small village up the Pacific coast. It is then that everything turns bad... Alfred Hitchcock is considered the acknowledged auteur master of the thriller or suspense genre, manipulating his audience's fears and desires, and taking viewers into a state of association with the representation of reality facing the character. ...read more.

For example; one of the first scenes in the film is set in San Francisco, at the beginning of that scene it was really bright and full of colour. This was used to help set the mood and atmosphere as a peaceful environment, compared to the scene where the characters are forced to defend themselves against the birds inside Mitch's house. In that scene the mood is not portrayed as calm and peaceful, it is more portrayed as a more dark and depressing due to the dark colours that are used. This could be due to the fact that dark colours are only really used when 'birds' or 'the flock' is near. This is called 'Chiaroscuro', a combination of light and shade in one still image. For example; when the characters are nervous after they hear the sound of birds, there is a low angle camera shot of the characters to help show their emotions. In front of the character it is lit slightly to allow us to see the character, but in the background it is shaded. This could be to show that the darkness or the birds are coming down on them and that they are coming for the humans. Also, Mise-en-scene is used with the avains (attacks) to make the birds seem even more dangerous than they really are, turning a not so dangerous creature into a terrifying one. ...read more.

If it would have moved before she screamed and started to it would not give the sense that it was a point of view shot as well a triple close up. Another example for this is at the end of the film where the characters are trying to escape. There is only the sound of the birds which helps create suspense because it will be the sound of the birds that will determine what the characters would do and it would affect the way they act. The mood of the scene is very dark and mysterious as it is mainly dark and low key lighting is used the most. During the scene the main feature you will notice is the fact that it is cover with birds. This creates suspense because you are not sure if the birds will attack or not and you are still not sure why the birds attacked in the first place. Also, throughout the film Alfred Hitchcock did not tell us why the birds attacked so you might have thought that it would be revelled at the end of the film. It was not but you did not know that at first because Alfred Hitchcock usually ends his films with 'THE END'. But there was no 'THE END' for 'The Birds', but I think this was so that Hitchcock allowed us to come up with our own ending in way. Since there was 'end' you are left with a lot of unanswered questions. ?? ?? ?? ?? ...read more.