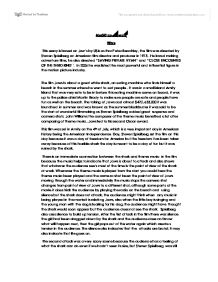 The director used many different ways to build up the fear of the shark, the shark being the star of the movie, Steven Spielberg had to use the music in the film, the theme music

Media coursework Jaws This essay is based on Jaw's by USA author Peter Benchley, the film was directed by Steven Spielberg an American film director and producer in 1975. He loved making adventure films, he also directed ''SAVING PRIVATE RYAN'' and ''CLOSE ENCOUNTES OF THE THRID KIND''. In 2006 he was listed the most powerful and influential figure in the motion picture industry. The film Jaws Is about a great white shark, an eating machine who finds himself a beach in the summer where he went to eat people . It was in a small island Amity Island that was very safe to be in before this eating machine came on board, it was up to the police chief Martin Brody to make sure people are safe and people have fun as well on the beach. The taking of Jaws cost almost $470, 653,000 it was launched in summer and was known as the summer blockbuster it was said to be the start of wonderful filmmaking as Steven Spielberg added great suspense and camera shots. John Williams the composer of the theme music benefited a lot after composing of theme music, Jaws led to his second Oscar award. This film was set in Amity on the 4th of July, which is a very important day in American history being the American Independence Day, Steven Spielberg set the film on this day because it was a day of freedom for America but the freedom has been taken away because of this horrible shark the day is meant to be a day of fun but it was ruined by the shark. ...read more.

water, the director also used the boat attack to build up fear of the shark to the audience, it was a scary part of the movie as fear of the shark is then been built up and at this point the audience knows what the shark is capable of. The director also builds up the fear of the shark through the reaction of the characters, in the first attack the girls facial expression showed horror, it showed pain and agony. In the second attack there was lots of blood in the water and Brody was scared, as the boy in the water got attacked and people in the water who saw the attack moved quickly out of the water because they were treated and terrified at the attack of the boy. Also during the autopsy Hooper looked disgusted as the he saw the damage the shark had done to the liver, internal and organs of the corpse. Also on the boat when Brody saw how big the shark was he was terrified and quickly went to tell the others that they would need a 'bigger boat', this shows the audience that the shark most be look very strong and massive for them to need a bigger boat, it's also gives the audience a clue that the boat would get broken down at a point in the movie, and this builds up the fear of the audience even more. ...read more.

This build up tension as the audience see a character dead they think the same would happen to the rest of the characters. The last scene builds up tenson when the boat broke and Brody was at the top of the broken boat and the shark was coming to him, he takes a gun and shoots at the gas cylinder in the sharks mouth, but he keeps missing, fear in audience is high and all hope is lost, until Brody takes his last shoot at the gas cylinder and it explodes and the shark is finally destroyed. All this helps build up tension and fear in the audience. The film Jaws as a whole was very scary being a horror and suspense movie where there was war between shark and human. There are lots of scary moment in the film, the first attack was very scary because we the audience knew nothing about the shark and its capability, but after the first attack the audience had realised what type of creature it was being very strong and had a sense of what it could do. The scariest moment in the movie was the scene where Brody, Hooper and Quint were going to capture the shark and they were all in the boat singing without knowing that the shark was breaking through the boat and they were singing so loud trying to get down their fears, because of the strength of the shark I though the shark would break the boat and it would sink with Brody, Hooper and Quint. ?? ?? ?? ?? ...read more.