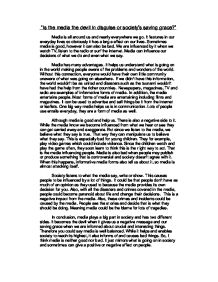 The Effect Media has on Society

"Is the media the devil in disguise or society's saving grace?" Media is all around us and nearly everywhere we go. It features in our everyday lives so obviously it has a large effect on our lives. Sometimes media is good, however it can also be bad. We are influenced by it when we watch TV, listen to the radio or surf the internet. Media can influence our decisions of what we do and even what we say. Media has many advantages. It helps us understand what is going on in the world making people aware of the problems and wonders of the world. Without this connection, everyone would have their own little community unaware of what was going on elsewhere. ...read more.

Although media is good and help us. There is also a negative side to it. While the media know we become influenced from what we hear or see they can get carried away and exaggerate. But since we listen to the media, we believe what they say is true. That way they can manipulate us to believe what they say. This is especially bad for young children. They for example, play video games which could include violence. Since the children watch and play the game often, they soon learn to think this is the right way to act. That is the media influencing people. Media is also bad when people may publish or produce something that is controversial and society doesn't agree with it. ...read more.

This is a negative impact from the media. Also, these crimes and incidents could be caused by the media. People see the stories and decide that is what they should be doing. Meaning media could be the blame for lots of tragedies. In conclusion, media plays a big part in society and has two different sides. It becomes the devil when it gives us a negative message and our saving grace when we are informed about crucial and interesting things. Therefore you could say media is well balanced. While it helps and enables society to reach its highest, it also informs of and causes bad things. So, I think media is neither good nor bad. It just mirrors what is going on in society and sometimes can give a positive or negative affect on people. ...read more.