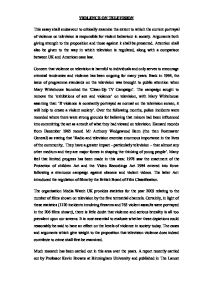 The Effect of Television Violence Upon Society

VIOLENCE ON TELEVISION This essay shall endeavour to critically examine the extent to which the current portrayal of violence on television is responsible for violent behaviour in society. Arguments both giving strength to the proposition and those against it shall be presented. Attention shall also be given to the way in which television is regulated, along with a comparison between UK and American case law. Concern that violence on television is harmful to individuals and only serves to encourage criminal tendencies and violence has been ongoing for many years. Back in 1964, the issue of programme standards on the television was brought to public attention when Mary Whitehouse launched the 'Clean-Up TV Campaign'. The campaign sought to remove the 'exhibitions of sex and violence' on television, with Mary Whitehouse asserting that: 'If violence is constantly portrayed as normal on the television screen, it will help to create a violent society'. Over the following months, police incidents were recorded where there were strong grounds for believing that minors had been influenced into committing the act as a result of what they had viewed on television. Hansard records from December 1965 record Mr Anthony Wedgewood Benn (the then Postmaster General) as stating that 'Radio and television exercise enormous importance in the lives of the community.. ...read more.

Ryan shot dead sixteen people, including his mother, before turning the gun on himself. The fact that he carried a Kalashnikov AV 47 rifle and wore a headband led to a belief that he imitating the Rambo film, 'First Blood'2 However, as was concluded by Jeremy Josephs in Hungerford: One Man's Massacre (1993): 'The truth was a lot less colourful. For it is simply not known whether Ryan ever saw any of the Sylvester Stallone films'. Furthermore, a BBC documentary later disclosed that there was no evidence to suggest that Ryan even possessed a video recorder and none that he had ever rented a video. In the nineties, the murder of two year old James Bulger in Bootle, Liverpool, was linked to 'Child's Play 3'. However, the subsequent director of the police investigation, Albert Kirby, later concluded that there existed no link and produced evidence to show that the only relevance of the video was that the father of one of the boys had rented it some months earlier (at a time when his son was not living with him). Moreover, psychiatric assessments confirmed that the son disliked such horror films. In America, the passing of the Telecommunications Act 1996 required all new television sets over 13" to be fitted with a 'V' chip by 1st January 2000. ...read more.

In 1988, Kate Adie, the BBC's Chief Reporter, investigated eight of the best evidenced cases whereby a crime had been linked to the media. The current affairs documentary, Panorama, broadcast her findings that there was no substantial or satisfactory evidence in even one of these cases linking the crime with media violence; she concluded that each of the allegations had been based on mere speculation alone. Conclusion In light of such weak evidence to support the argument that portrayal of violence on television leads to increased violence in society, a popular argument suggests that only the particularly vulnerable sector of viewers will be aversely affected; an obvious group to investigate would be those who have already committed criminal offences9. Whilst the importance of close supervision of minors and the vulnerable should not be under estimated, it could be argued that the general concerns relating to television violence are less significant than the broader concerns relating to the nature of our society and its apparent collapse. Furthermore, with appropriate controls in place for the above vulnerable sectors (not to mention due recognition of moral, philosophical, religious or humanistic grounds10), there is certainly strength in the assertion that the media of television should not be held accountable for crime levels in society, but rather be recognised merely for what it is: something not to be relied upon and trusted as a window on the world, but merely one of the available sources of entertainment in modern day society. ...read more.