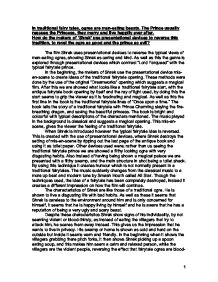 The film Shrek uses presentational devices to reverse the typical views of man-eating ogres, showing Shrek as caring and kind.

This gives us the impression that he wants to live in privacy. His swamp or home is shown as cold and hard on the outside but inside it seems warn and friendly. In the beginning when it shows the villagers grabbing there pitch forks, it then shows Shrek picking up a spoon eating soup, and this makes him seem a calm and relaxed person, while the villagers are the violent people, reversing the effect that fairytale ogres are blood-thirsty. As the film goes on we see a change in Shrek's character as he meets Donkey. Rather than being selfish, he changes to be a friendlier individual. He doesn't mind Donkey talking to him; in fact he is surprised that Donkey is not bothered that he is an ogre. I think Donkey plays an important part in how we see Shrek, he helps to reverse the idea of Shrek being like a traditional ogre. Further in the film Shrek is shown as a hero when he desires to remove the fairytale creatures off his land. This causes the fairytale creatures to cheer, creating the image of Shrek being a hero instead of an ugly ogre. ...read more.

However at the end of the tournament he makes a deal with Shrek, which involves Shrek saving the princess so that he can have his land back. When saving the princess Shrek doesn't follow what happens in normal fairytales, for instance instead of kissing her to wake her up he shakes her, secondly he doesn't slay the dragon before saving her, thirdly he takes a donkey instead of a horse and finally once he has saved the princess he misuses the token of gratitude she gives him. During his return with the princess he develops feelings of love for the princess, which shows a softer side to him. When back he interrupts the wedding to express his love to Fiona, only to find out she feels the same. They get married and live happily ever after, as Lord Farquaad got eaten by the dragon just like a traditional villains death. I feel the moral of the film was 'never judge some by how they look rather than their personality' I think this is shown very well in Shrek. ?? ?? ?? ?? 1 ...read more.