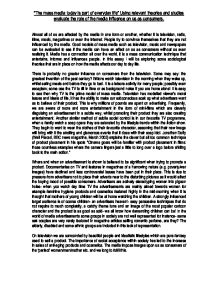 &quot;The mass media today is part of everyday life&quot; Using relevant theories and studies evaluate the role of the media influence on us as consumers. Almost all of us are affected by the media in one form or another, whether it is television

"The mass media today is part of everyday life" Using relevant theories and studies evaluate the role of the media influence on us as consumers. Almost all of us are affected by the media in one form or another, whether it is television, radio, films, music, magazines or even the internet. People try to convince themselves that they are not influenced by the media. Good models of mass media such as television, music and newspapers can be evaluated to see if the media can have an effect on us as consumers without us even realising it. Media has a connection all over the world, it is a mass communication technique that entertains, informs and influences people. In this essay I will be exploring some sociological theories that are in place on how the media affects our day to day life. There is probably no greater influence on consumers than the television. Some may say: the greatest invention of the past century? Britons watch television in the morning when they wake up, whilst eating meals and before they go to bed. It is a leisure activity for many people; possibly even escapism; some use the TV to fill in time or as background noise if you are home alone! ...read more.

women for example feminine hygiene products and cosmetics featured highly in the mid-morning when it is thought that mothers of young children will be at home watching the children. A strongly influenced target audience is of course children- an advertisers heaven!- easy persuasive techniques that do not require to much complexity, a catchy theme tune and an image of the most popular cartoon character and the product is as good as sold- we all know how demanding children can be! In the world of media advertisements some groups in society are not well represented for instance- same sex couples are very rarely featured in magazine articles selling romantic perfume, are they? The elderly, disabled and some ethnic groups are included in this lack of representation. On television we are surrounded by beautiful people and idealistic lifestyles which are pure fantasy used to sell a product. The importance of social acceptance within society has led to the increase in sales of anti-aging products and cosmetics. The media impose images upon us as consumers of the 'perfect' woman/man/mother etc. and we long to fulfil this. ...read more.

The interpretative model is one which introduces a 'filtering' system when media messages are being received. Audiences are made up of different kinds of people who receive messages in various ways, be it ignoring or reacting to the message they all interpret these messages from their own viewpoint. In conclusion, it is clear that the media has a huge impact on people's opinions and values. If a person is more informed about a topic then naturally the decision that they make is of better quality. However, one significant feature to consider is where we actually gain our information? Perhaps it would be beneficial if we as consumers were more careful about what we hear or read? Advertising has progressed drastically over the years, bringing new techniques and methods which are moulding consumerism. Items once thought of as luxuries are now being portrayed as necessities which are not always obtainable to the average person, the same goes for the image and lifestyles that are conveyed throughout the media. A 'climate of discontent' is created when people fail to achieve this perfection leading to people being un-happy and ungrateful for the life they are living which depending on which way you look at it could be a good or a bad thing....? ...read more.

With reference to the question, this student has looked at a range of both media and social theories and has been able to offer an explanation of them. I would have liked perhaps some more concrete examples rather than hypothesizing and for all of the quotes to have been sourced. However, an excellent attempt with thorough use of media language and theory. ****