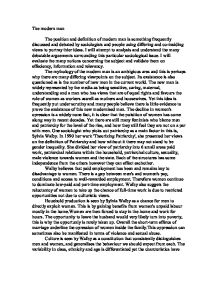 The modern man The position and definition of modern man is something frequently discussed and debated by sociologists and people using differing and co-insiding views to portray thier ideas. I will attempt to analysis and understand the many debatable arguements surrounding this particular sociological issue. I will evaluate the many notions concerning the subject and validate them on effeciency, information and relevancy. The mythology of the modern man is an ambigious area and this is perhaps why there are many differing viewpoints on the subject. Its exsistance is also questioned as is the number of new men in the current world. The new man is widely represented by the media as being sensitive, caring, maternal, understanding and a man who has views that are of equal rights and favours the role of women as workers aswell as mothers and housewives. Yet this idea is frequently put under scrutiny and many people believe there is little evidence to prove the exsistance of this new modernised man. The decline in women's opression is a widely none fact, it is clear that the poisition of women has come along way in recent decades. Yet there are still many feminists who blame men and patriarchy for the level of the rise, and how they still feel they are not on a par with men. ...read more.

Its very clear on this evidence that the new man is widely considered to be a myth. Yet the fact that it is a myth means that it must have been believed in by someone, and then passed on until now. The sociologists I have mentioned are all feminists and they have clearly marked out their views yet they fail to consider how males see this situatuation or they have not used any information to back up their views. They have relied completely on theory and feminist view point. The new man may in fact exsist just not in these few sociologists eyes as they too have their own opinion.The myth of the new man must have started somewhere, and its widely apparent that the media is key to the idea of the new man. In films, newspapers, magazines and television, ideas can be transported to an audience in clever and demeaning methods. The reasons the sociologists have put forward are not always true, they may have been altered just to suit their particular viewpoint. This is unfair as it can be an untruthful representation of men. If men are so dominating and women are forced to work at home, why do they marry and agree to live with a man? ...read more.

Yet this is not mentioned as people perhaps want men to be viewed as putting women down. It can also be argued that women revel in the fact that men apparently dominate thier lives, they are in the position to complain and perhaps retrieve treatment they would not usually achieve.This would then deminish the idea of the modern man as people would not believe these claims due to the amount of bad claims made against men. This is unfair to men as it is rare that men are unfairly treated by women and complaints of this are even moe rare, so therefore women atke up a postion of assissted life whilst men are left to themselves. In conclusion with all of this information and its contrasting views, it has proven very difficult for soicologists to currently agree on the myth of the modern man.Feminists argue their opinion that the new man doesn't exsist, yet there is also evidence that this may be unfair or an untruthful represenatation of men as a whole. When the aspects are considered surrounding patriarchy there is good evidence to prove the opression of women, yet there are also flaws which help claim the exsistance of the new man. With all these in mind it is very hard to actually decide whether it is a myth or not. ...read more.