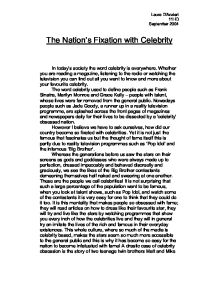 The Nation's Fixation with Celebrity

The Nation's Fixation with Celebrity In today's society the word celebrity is everywhere. Whether you are reading a magazine, listening to the radio or watching the television you can find out all you want to know and more about your favourite celebrity. The word celebrity used to define people such as Frank Sinatra, Marilyn Monroe and Grace Kelly - people with talent, whose lives were far removed from the general public. Nowadays people such as Jade Goody, a runner up in a reality television programme, are splashed across the front pages of magazines and newspapers daily for their lives to be dissected by a 'celebrity' obsessed nation. However I believe we have to ask ourselves, how did our country become so fixated with celebrities. Yet it is not just the famous that fascinates us but the thought of fame itself this is partly due to reality television programmes such as 'Pop Idol' and the infamous 'Big Brother'. Whereas the generations before us saw the stars on their screens as gods and goddesses who were always made up to perfection, dressed impeccably and behaved discreetly and graciously, we see the likes of the Big Brother contestants demeaning themselves half naked and swearing at one another. ...read more.

Their transformations were complete after three months of agony where they underwent serious intensive cosmetic surgery. I believe that it is a truly sad world we live in when people undergo such extreme measures in order to resemble their celebrity idols. The Schlepp brothers were the first to appear on a MTV show called 'I want a Famous Face'. The series included a nineteen year old modelling hopeful who had breast implants, lip implants and liposuction to look like Pamela Anderson and a twenty-three year old transsexual who had breast implants, cheek implants, an eyebrow lift, eyebrow bone shave and his hairline lowered to look like Jennifer Lopez! In these cases the effects of a celebrity's image resulted in extreme surgery. However just as terrifying is the increase of eating disorders among teens and I believe this is partly due to the incredible amount of articles and impossible pictures teenagers see on a weekly basis. The pictures of celebrities in teen magazines show impossible beauty that no one could achieve, not even the stars in the pictures themselves because the pictures have been digitally altered to 'perfection'. ...read more.

For others television programmes such as Pop idol and X Factor provide possibilities to reach superstardom. These programmes work on a basis that anyone and everyone has a chance to make it big. This concept is not only exciting but it gives chances to people who would never have got such incredible opportunities. However we must remember that for the hundreds of thousands of hopefuls who audition for these television shows at the end of the series we are unlikely to remember the names of more than three of the contestants. In today's society it is becoming possible, to quote Andy Warhol, for everyone to have fifteen minutes of fame, but is this necessarily a good thing? Those who do not reach fame, or have it temporarily can feel like failures and those who have it are under constant speculation by the press and public. I personally believe that the situation will get worse before it gets any better, but eventually it will reach a climax and we might revert back to a 1950's like society where stardom was distant and actors and singers were just doing a job and were not public domain! So until then, we shall still be dressing, watching and living celebrity! Laura D'Anzieri 11HD September 2004 ...read more.