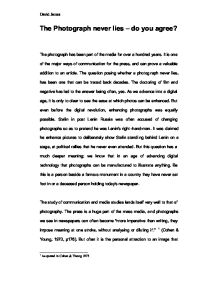 The Photograph never lies - do you agree

The Photograph never lies - do you agree? The photograph has been part of the media for over a hundred years. It is one of the major ways of communication for the press, and can prove a valuable addition to an article. The question posing whether a photograph never lies, has been one that can be traced back decades. The doctoring of film and negative has led to the answer being often, yes. As we advance into a digital age, it is only to clear to see the ease at which photos can be enhanced. But even before the digital revolution, enhancing photographs was equally possible. Stalin in post Lenin Russia was often accused of changing photographs so as to pretend he was Lenin's right-hand-man. It was claimed he enhance pictures to deliberately show Stalin standing behind Lenin on a stage, at political rallies that he never even attended. But this question has a much deeper meaning; we know that in an age of advancing digital technology that photographs can be manufactured to illustrate anything. Be this is a person beside a famous monument in a country they have never set foot in or a deceased person holding today's newspaper. ...read more.

The Telegraph and Daily Mail have often been described as Tory papers, turning towards the right wing of the political spectrum. Therefore in representing the current British Government in a bad light is to their advantage. A picture of Tony Blair, this could be a mere split second shot, looking tired or weak plays into the hands of the newspaper. They are trying to sell their paper, and in knowing that their target audience is similarly politically biased, then this 'sensationalist' journalism will sell papers. It has seen no manipulation of the actual picture and so they haven't broken any press standards, they have merely optimised an unfortunate image. An image that has an entire story behind, even though it would be wrong. "The photographer becomes a major figure, the public's eye witness", this is view of Karin E. Becker, and one that is interesting to study. (Liz Wells (Ed.), 2003, p303) For if the photographer is the author of the picture then arguably he chooses its content. For example, a picture is a snap shot, a split second of a particular scene. But the boundary of the photograph is just the edge of the picture; the story continues. ...read more.

Television is a stream of unselected images, each of which cancels its predecessor." (Susan Sontag, 1979, p17) It is still photographs that live long in the memory, the images of the World Trade Centre, burning on a clear autumnal day in September, or the faces of victims of the towers fleeing from the thick dust engulfing Lower Manhattan following the collapse of the towers. These images live long on and prove that still today photography is a powerful medium. As I have discussed in this essay, I strongly disagree with the notion that the camera never lies. In a digital age it is to easy now for newspapers to influence pictures for their own good: "here we see the 'original' image repeatedly manipulated and altered with irrelevant disregard for the standards that guide the elite press", Karin E. Becker's view being that the tabloids notoriety for manipulating images is a consistent violation (Liz Wells, 2003, p304). But it is not just the onslaught of digital cameras, and powerful imaging software that has allowed for photographs to lie, the photographer himself, as the author of the picture allows himself an unprecedented privilege of choosing his content and potentially modifying the truth. But as we move into an age of the Internet, pictures once more come back again as a new form of media, allowing even more potential for misleading images. ...read more.