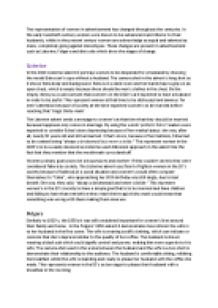 Transfer-Encoding: chunked ﻿The representation of women in advertisement has changed throughout the centuries. In the early twentieth century women were known to be subservient and inferior to their husbands, whilst in the present century women are acknowledge as equal and talented as mans, completely going against stereotypes. These changes are present in advertisement such as Listerine, Folgers and diet coke which show the stages of change. Listerine In the 1920 Listerine advert it portrays women to be desperate for a husband by showing the model Edna can?t cope without a husband. The camera shot in the advert is long shot as it shows Edna body and background. Edna is in a dark room and her hands have a grip on an open chest, which is empty because there should be men?s clothes in the chest. By the empty chest you could connote that women?s in the 1920?s are expected to have a husband in order to be joyful. This represent women at that time to be distressed and anxious for men?s attention because of society at the time expected women?s to be married before reaching that ?tragic thirty-mark.? The Listerine advert sends a message to women?s at that time that they should be married because happiness only comes in marriage. ...read more.

Women?s place in the 1950?s society was to be a housewives that catered to their husband?s needs, failing to do so would make you a bad wife until you succeed. This is shown in the third and eightieth scenes were the wife costume change from shabby to beautifully dress because she changed the brand of coffee she has been using to Folgers. In the third scene a two shot was used to show the husband and wife character performance; the husband is position in the scene towering over his wife with a scowl on his face. This could connate that his disappointed and furious at his wife for making a ?lousy? coffee. The wife is position as a submissive to her husband because she keeping her eyes on him and her shoulder are slouched, which could connate fear and regret. In scene eight you could see the change of character performance between both characters when the wife gives her husband the Folgers coffee. The husband looks pleased with the coffee his wife gave him and even kissed her cheeks to show his grateful and the wife blushing at the kiss she got was glad that she has pleased her husband with a descent coffee. ...read more.

to impress her husband and please him at the same time with wedding pictures and the event so would be taking the whole wedding more serious. This represents that women?s in the 2009 to be more relax and stress-free. The over-the-shoulder shot shows the women in an office with two mans that are looking up at her while she present something to them. This could connote that she is the boss because they are looking up at her. This is unlikely to happen in a 50?s society because women?s were expected look after their husband and children. The outfit the two women are wearing in the scene are a black suit which signifies power and wealth, representing women to be powerful and wealthy. The technique used in the advert is to empowering women?s and overcoming the stereotypes. The change in the role shows that women?s are equal and slightly more superior to man?s. This is clearly shown the scenes of the advert. The advert is obviously positive as it gives a new light to the image of women?s. The representation of women has changed from being desperate to their husband, pleasing their spouse and independent that their able to make their choices and even be the bosses of men?s. This is shown in all the three adverts. So in general women?s change advertisement. ...read more.