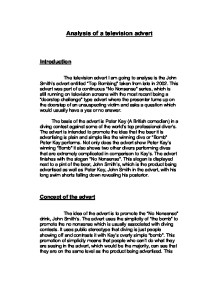 The television advert I am going to analyse is the John Smith's advert entitled &quot;Top Bombing&quot; taken from late in 2002. This advert was part of a continuous &quot;No Nonsense&quot; series

Analysis of a television advert Introduction The television advert I am going to analyse is the John Smith's advert entitled "Top Bombing" taken from late in 2002. This advert was part of a continuous "No Nonsense" series, which is still running on television screens with the most recent being a "doorstep challenge" type advert where the presenter turns up on the doorstep of an unsuspecting victim and asks a question which would usually have a yes or no answer. The basis of the advert is Peter Kay (A British comedian) in a diving contest against some of the world's top professional diver's. The advert is intended to promote the idea that the beer it is advertising is plain and simple like the winning dive or "Bomb" Peter Kay performs. Not only does the advert show Peter Kay's winning "Bomb" it also shows two other divers performing dives that are extremely complicated in comparison to Kay's. The advert finishes with the slogan "No Nonsense". This slogan is displayed next to a pint of the beer, John Smith's, which is the product being advertised as well as Peter Kay, John Smith in the advert, with his long swim shorts falling down revealing his posterior. Concept of the advert The idea of the advert is to promote the "No Nonsense" drink, John Smith's. The advert uses the simplicity of "the bomb" to promote the no nonsense which is usually associated with diving contests. ...read more.

Other adverts may use less striking, more subliminal images, and some use an advert in the form of a story or scene. This advert uses a story of a man in a diving contest, what would usually be a very difficult thing. The simplicity of the "bomb" puts forward the no nonsense slogan. The visuals in the advert reflect those of a diving contest because that is the theme that the advert is based around. The advert displays the name and nationality of the "divers" in green text boxes as well as the scores awarded by the judges to each of the 3 divers. The first is awarded 49.1 by the judges, the second follows with 82.7, and finally John Smith with a perfect 120.the fact that the viewers are seeing an obviously less impressive dive meeting none of the categories required in diving for a good dive shows that, "No Nonsense", the slogan for the beer is obviously the best. This idea in the viewers mind means that the beer is the best and perfect like the score so therefore they should drink it over a different type of beer. When Smith performs his "bomb" it is very loose and relaxed rather than tight and concentrated like most performing divers. This bit of the visuals helps to reinforce the point that there is none of the diving nonsense where u focus and get on with it but the idea that it's all a bit of a laugh and a joke and that it really is simple. ...read more.

This really helps to set the scene for the advert. The advert being convincing and authentic makes it more memorable. Although there is only two people talking in the script, neither of which are on stage, they are entirely necessary to understand the advert. Use of aural techniques Adverts often exaggerate sounds to get a point across. In this advert the sound of Smith jumping on the diving board is obviously over done to show he is a lot larger than the other competitors in the competition. This also adds a comedy effect making the advert memorable, but possibly not as significant as the visual techniques used. The general public that have turned out to what the diving contest cheering the most for the most simplistic dive or "bomb" shows that the general public like simplicity and would therefore like John Smith's beer. This suggestion links to the viewer of the advert and puts that idea into their head which would then hopefully make them choose John Smith's beer over a different brand. Conclusion This advert does a very good job of convincing people to buy John Smith's beer. It is humorous while being real enough to be able to recognise what is meant to be taking place in the advert. It allows people to draw conclusions while being understandable in layman's terms. It was a very successful series of adverts run by John Smith's as sales figures showed. ...read more.