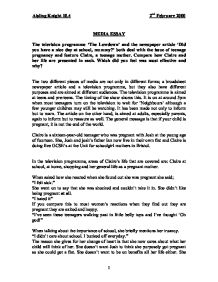 The television programme &amp;#145;The Lowdown&amp;#146; and the newspaper article &amp;#145;Did you have a nice day at school, mummy?&amp;#146; both deal with the issue of teenage pregnancy and feature Claire, a teenage mother. Compare how Claire and her life are presen

MEDIA ESSAY The television programme 'The Lowdown' and the newspaper article 'Did you have a nice day at school, mummy?' both deal with the issue of teenage pregnancy and feature Claire, a teenage mother. Compare how Claire and her life are presented in each. Which did you feel was most effective and why? The two different pieces of media are not only in different forms; a broadsheet newspaper article and a television programme, but they also have different purposes and are aimed at different audiences. The television programme is aimed at teens and pre-teens. The timing of the show shows this. It is on at around 5pm when most teenagers turn on the television to wait for 'Neighbours' although a few younger children may still be watching. It has been made not only to inform but to warn. The article on the other hand, is aimed at adults, especially parents, again to inform but to reassure as well. The general message is that if your child is pregnant, it is not the end of the world. Claire is a sixteen-year-old teenager who was pregnant with Josh at the young age of fourteen. ...read more.

And babies grow like wild fire so they always need new clothes. She feels guilty when spending �20 on herself. She has a Boots advantage card, but instead of spending points on cosmetics or toiletries like a normal teenage would, she spends points on nappies! So really Claire is very lucky that Ian stayed with her, as babies are so expensive. If she only just scrapes by now, she would be quite stuck without Ian's financial support. But she had been with Ian for seven months before the pregnancy so it wasn't as if it was a one-night fling. Claire seems quite positive about one thing; "I knew he'd stay with me." Claire says that now she has a child to think about, they have to cook healthy meals. "If it were just me and Ian I wouldn't bother cooking." Even though Josh has brought all this trouble with him, she wouldn't be without him now. "I love him more than I love anyone or anything else." Nevertheless, if her daughter was pregnant... "I wouldn't be pleased." At the end, Claire and some of the other girls go to another school and give a talk to girls their age. ...read more.

But, in case of anyone thinking the article encourages teenage pregnancy the article adds: "Would she recommend getting pregnant to anyone else her age? "Of course not." She replies, suggesting this is a silly question. She mentions exhaustion, hard work, no money and not fitting into any of her old clothes. The very last paragraph is on a positive note. Claire explains that without Josh, her life would have gone steadily down hill. I very much like the last sentence: "there is nothing like the rude shock of motherhood to concentrate the mind." -This is a very witty last line that stuck in my mind for weeks! I think that although it has been hard work for Claire, she has coped as well with a baby as any normal mother would. When listing the cons of teenage pregnancy it says: "the same draw backs you hear to variable degrees from most mothers" suggesting just this. I think that both pieces of media are effective, but I feel I cannot chose between them, as their purposes are different. Each one, the newspaper article and the television programme, have very impressive endings, which have a lot of impact, although the television programme has the advantage of sound and picture over the article. Aisling Knight 10.4 2nd February 2000 1 ...read more.