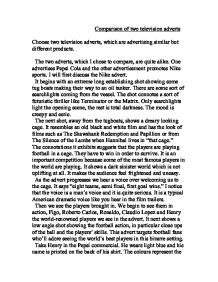 The two adverts, which I chose to compare, are quite alike. One advertises Pepsi Cola and the other advertisement promotes Nike sports. I will first discuss the Nike advert.

Comparison of two television adverts Choose two television adverts, which are advertising similar but different products. The two adverts, which I chose to compare, are quite alike. One advertises Pepsi Cola and the other advertisement promotes Nike sports. I will first discuss the Nike advert. It begins with an extreme long establishing shot showing some tug boats making their way to an oil tanker. There are some sort of searchlights coming from the vessel. The shot connotes a sort of futuristic thriller like Terminator or the Matrix. Only searchlights light the opening scene, the rest is total darkness. The mood is creepy and eerie. The next shot, away from the tugboats, shows a dreary looking cage. It resembles an old black and white film and has the look of films such as The Shawshank Redemption and Papillion or from The Silence of the Lambs when Hannibal lives in "that cage." The connotations it exhibits suggests that the players are playing football in a cage. They have to win in order to survive. It is an important competition because some of the most famous players in the world are playing. It shows a dark sinister world which is not uplifting at all. It makes the audience feel frightened and uneasy. As the advert progresses we hear a voice over welcoming us to the cage. It says "eight teams, semi final, first goal wins." I notice that the voice is a man's voice and it is quite serious. ...read more.

As the music goes to the end it stops when they score; both adverts do this. In the Nike advert it shows direct action of the footballers legs. It brings out their ability and how good they are. The audience is captivated by the silky skills of the players then is left wondering how do they manage to do that with a football? The audience will have all heard of Nike. It clarifies to us that the football players play with the greatest brand name in the world. We must remember that the Nike commercial is trying to sell Pepsi drinks and the Nike advert promotes a sports product. They are both using the world cup as a theme to sell their product which is a great way to make it known to a much wider audience, the more people that know about it the more money the product is making. The first sound we hear in the Pepsi advert is a drum. It creates an effect of a war drum that heralds a battle going to take place. We see some writing right at the beginning giving us information where we are and what it is about. The letters are big and bold and are displayed at the bottom of the commercial. They are in the style of the beautiful Japanese writing, the letters read "Japanese football training camp." ...read more.

This will amuse the audience and will make them feel like laughing and talking about it. When they have watched something like this it will leave them in a happy mood and by association they will feel good about Pepsi. World cup advertising France and Senegal played the first world cup game. Three games are shown each day and BB1 and ITV share the coverage. The adverts are on every single day, the reason for that is to target football fans to buy their products. As well there are other popular commercials that show football on them, John Smiths, Carlsberg, Carling and the Clio car. Alcohol is associated with football as they are both a mixture with the British culture. The sales of alcohol will have rocketed showing adverts like this, which is good for the product. It is also good for the pub oners as they will be selling an quite alot of beer. Commercials like this are mainly targeted at men as women don't really drink beer. Some women may find adverts like this rather sexist. The companies pay a hefty amount of money to have their commercials shown on TV. The characters they use in their adverts are stereotypical, e.g., people from rough families. In the adverts they use submissive females being told what to do by the laddish lazy men. The advertising revenue is enormous; millions of people worldwide are watching these commercials but they do not feature a lot of dialogue. Therefore they can be sold to different countries throughout the world. ...read more.