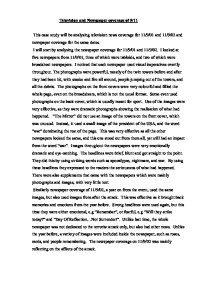 Television and Newspaper coverage of 9/11 This case study will be analysing television news coverage for 11/9/01 and 11/9/02 and newspaper coverage for the same dates. I will start by analysing the newspaper coverage for 11/9/01 and 11/9/02. I looked at five newspapers from 11/9/01, three of which were tabloids, and two of which were broadsheet newspapers. I noticed that each newspaper used visual imperatives overtly throughout. The photographs were powerful, mostly of the twin towers before and after they had been hit, with smoke and fire all around, people jumping out of the towers, and all the debris. The photographs on the front covers were very colourful and filled the whole page, even on the broadsheets, which is not the usual format. ...read more.

By using these headlines they expressed to the readers the seriousness of what had happened. There were also supplements that came with the newspapers which were mainly photographs and images, with very little text. Similarly newspaper coverage of 11/9/02, a year on from the event, used the same images, but also used images from after the attack. This was effective as it brought back memories and emotions from the year before. Strong headlines were used again, but this time they were either emotional, e.g "Remember", or fearful, e.g "Will they strike today?" and "Day Of Reflection...Not Surrender!". Unlike last time, the whole newspaper was not dedicated to the terrorist attack only, but also had other news. Unlike the year before, a variety of images were included inside the newspaper, such as roses, cards, and people remembering. ...read more.

There were very few shots of the pentagon, as all the "action" seemed to be taking place at the twin towers. There was also live footage, with interviews and witnesses, and people crying. This made the audience empathise with them and feel involved. As the newsreaders spoke about the events it seemed as if they were constructing a scenario or story. The news format was different for example it was longer, and the technical quality and professionalism was not to the usual standard. The newsreaders seemed to be shocked and genuinely emotional themselves. Similarly, television news coverage from 11/9/02 used many repeated images from the attack the year before. There was also live footage from a variety of locations where victims from the attack were being remembered. There were a lot of close ups of peoples faces which emphasised their emotions, and that although a year had gone by they had still not forgotten the pain. ...read more.