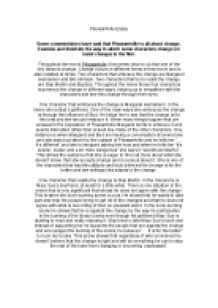 Throughout the movie Pleasantville it becomes clear to us that one of the key ideas is change.

﻿Pleasantville Essay Some commentators have said that Pleasantville is all about change. Examine and illustrate the way in which some characters change (or resist change) in the film. Throughout the movie Pleasantville it becomes clear to us that one of the key ideas is change. Change occurs in different forms in this movie and is also resisted at times. Two characters that embrace the change are Margaret Henderson and Bill Johnson. Two characters that try to resist the change are Skip Martin and Big Bob. Throughout the movie these four characters experience the change in different ways, helping us to empathize with the characters and see this change through their eyes. One character that embraces the change is Margaret Henderson. In the movie she is Bud?s girlfriend. One of the main ways she embraces the change is through the influence of Bud. He helps her to see that the change is for the best and she should embrace it. When many things happen that are unusual to the population of Pleasantville Margaret tends to embrace it and seems interested rather than scared like many of the other characters. ...read more.

In the book-burning scene he shows that he is against the change by the way he participates in the burning of the library books even though his girlfriend Mary Sue is starting to read and really enjoying it. Skip tries to take Mary Sue?s book and instead of supporting her he supports the people that are against the change and encourages the burning of the books, he believes ?? it is for the better? to burn her books. This scene shows that regardless of who is involved he doesn?t believe that the change is right and will do everything he can to stop the rest of the town from changing or becoming ?unpleasant?. Another character that accepts the change is Bill Johnson. At first he seems scared and unused to change, which is in one of the first scenes at the soda shop when he says to Bud ?I didn?t know what to do ? you weren?t here to put out all the napkins and glasses so I kept wiping instead of making the french fries?. ...read more.

He has a hostile attitude towards change and one scene that demonstrates this is when he holds a meeting at the town hall regarding the changes. He gives a speech saying ?Obviously certain changes have been happening. Up until now, things in Pleasantville have always been? well pleasant. And recently certain things have become? unpleasant. Now it seems to me what we have to do is separate the unpleasant things from the pleasant things?. This shows that he does not agree with the changes and sees them as unpleasant and that they need to be gotten rid of before things get any worse. Because Big Bob is the Mayor he expects people to share his beliefs and follow him with getting rid of all the ?unpleasant? things, however some people accept and like the change so it isn?t as simple as he hopes making him more sour and against change then when it first started occurring. In the movie Pleasantville change occurs in many characters in many different ways. Some characters embrace it and some others resist it but at the end of the movie everyone has changed and grown, this shows that change is needed in order to grow. ...read more.