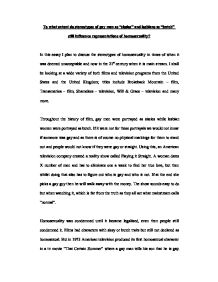 To what extent do stereotypes of gay men as &quot;sissies&quot; and lesbians as &quot;butch&quot; still influence representations of homosexuality?

To what extent do stereotypes of gay men as "sissies" and lesbians as "butch" still influence representations of homosexuality? In this essay I plan to discuss the stereotypes of homosexuality in times of when it was deemed unacceptable and now in the 21st century when it is main stream. I shall be looking at a wide variety of both films and television programs from the United States and the United Kingdom; titles include Brokeback Mountain - film, Transamerica - film, Shameless - television, Will & Grace - television and many more. Throughout the history of film, gay men were portrayed as sissies while lesbian women were portrayed as butch. If it were not for these portrayals we would not know if someone was gay and as there is of course no physical markings for them to stand out and people would not know if they were gay or straight. Using this, an American television company created a reality show called Playing it Straight. A woman dates X number of men and has to eliminate one a week to find her true love, but then whilst doing that also has to figure out who is gay and who is not. If at the end she picks a gay guy then he will walk away with the money. ...read more.

Men will dance and sing along and act very camp. They also have what they call as gay anthems such as Gloria Gaynor's I Will Survive. Music such as these are about women singing about men and being stong and independent, something gay men can relate to. Gay men also seem to like the cheesy pop songs such as the Cheeky Girls and Steps. All the television and films I have spoken about are all about flaunting their sexuality bar the ones that are not portrayed as sissies. In an English drama called Shameless, there is a character called Ian who is a 15 year old who is described as "actively gay but very private" on the back of the DVD case of series 1. He does his best to hide the fact he is gay by having a girlfriend and having his brother to sleep with her in the house so people would not get suspicious of his true sexuality. His father openly says that he hates gay people and beat him up when he had an incline thinking it would "knock some sense into him". The father's reaction shows that to this day there are people who only think that being homosexual is wrong and this is known as homophobia. ...read more.

Today homosexuals are still labelled as sissies and butch, and actually follow this way of life. It is unknown whether it is because it is influenced by the media or by their peers. Lesbians that I have noticed in clubs such as G-A-Y are butch, and have short hair, tattoos and have a masculine flare to their style or attitude. Whilst the gay men are very camp, flamboyant and feminine, they also are obvious the untrained eye that they are indeed gay. With the media now slowly changing is perspective of homosexuals it is unknown whether the homosexuals will as well. Personally I think the stereotype will never end as it such a strong one that we all have and it will be very difficult for it to stop because it will be passed down to each generation. It may die out but it will not be extinct like the Nazi opinions as they still exist today. Biblograpghy: Books: Critical Readings: Media and Gender Edited by Cynthia Carter and Linda Steiner The Matter of Images: Chapter 4: Seen to be believed Reading pack: Chapter 7: Queer Theory and Fluid Identities Films/Television: Brokeback Mountain Eastenders Ellen Playing It Straight Queer as Folk Queer Eye for the Straight Guy Shameless Sex and the City Transamerica Wedding Stories Will & Grace Clubs visited for research: G-A-Y, Soho, London Heaven, Soho, London ...read more.