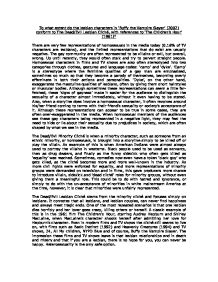 To what extent do the lesbian characters in 'Buffy the Vampire Slayer' (2002) conform to The Dead/Evil Lesbian Clich, with references to 'The Children's Hour' (1961)?

To what extent do the lesbian characters in 'Buffy the Vampire Slayer' (2002) conform to The Dead/Evil Lesbian Clich�, with references to 'The Children's Hour' (1961)? There are very few representations of homosexuals in the media today (0.16% of TV characters are lesbians), and the limited representations that do exist are usually negative. The gay community are often represented to be villains or evil, but overall, wrong. Up until recently, they would often stalk and try to pervert straight people. Homosexual characters in films and TV shows are also often stereotyped into two categories through clothes, gestures and language codes: 'camp' and 'dyke'. 'Camp' is a stereotype where the feminine qualities of a gay man are emphasised, sometimes so much so that they become a parody of themselves, becoming overly effeminate in both their actions and personalities. 'Dyke', on the other hand, exaggerates the masculine qualities of lesbians, often by giving them short hairstyles or muscular bodies. Although sometimes these representations can seem a little far-fetched, these 'signs of gayness' make it easier for the audience to distinguish the sexuality of a character almost immediately, without it even having to be stated. Also, when a storyline does involve a homosexual character, it often revolves around his/her friend coming to terms with their friend's sexuality or society's acceptance of it. Although these representations can appear to be true in some cases, they are often over-exaggerated in the media. When homosexual members of the audiences see these gay characters being represented in a negative light, they may feel the need to hide or lie about their sexuality due to prejudices in society, which are often shaped by what we see in the media. The Dead/Evil Minority Clich� is when a minority character, such as someone from an ethnic minority, or homosexuals, is brought into a storyline simply to be killed off or play the villain. ...read more.

It was generally frowned upon, and in some places, a consenting male could be arrested for having homosexual sex with another consenting male, even in the privacy of his own home. The Children's Hour (1961) is based on the novel by Lillian Hellman. It tells the story of two friends, Karen Wright (Audrey Hepburn) and Martha Dobie (Shirley MacLaine) who join forces to set up the Wright-Dobie School for Girls. The school runs successfully for a while and Karen believes she will soon be able to marry Joe Cardin. However, Karen has to discipline Mary Tilford, a student who always wants her own way and, worse, is a congenital liar. Upset at being told off by Karen, Mary complains to her grandmother Mrs. Tilford. To strengthen her complaint, Mary repeats part of a conversation that she overheard - but barely understood - a conversation in which Martha's Aunt Lily accused Martha of having an unnatural relationship with Karen. Mrs. Tilford is horrified and spreads the word to the parents of the other girls, who are disgusted. The pupils are immediately taken out of school, much to the surprise of Karen, Martha and Joe. They finally approach Mrs. Tilford and question her about what is going on. She reveals that Mary had spied on her teachers and found them kissing. This leads Karen and Martha to sue Mrs. Tilford, but they lose the case due to lack of evidence, specifically the testimony of Martha's aunt, Lily Mortar. After they close the school Karen and Martha try to regain a normal life, but it is impossible. While sitting around and chatting, Martha reveals her secret: although she never acted on her feelings, she has always been attracted to Karen, beyond friendship. This is too much for Martha and she goes to her room where she commits suicide by shooting herself. Although this film would be seen as relatively tame now, at the time it was released it was considered to be extremely controversial. ...read more.

- shows that even today, TV shows are limited in what they can show on primetime TV by broadcasters and television networks. This is due to the audience reaction. If an audience is offended in some way or doesn't like what is being screened (as may be true in this case), ratings will drop, therefore TV networks simply won't show it. Willow and Tara's relationship has always been a pretty realistic portrayal of a lesbian relationship, and in comparison to some of the others in the show (Buffy with vampire Spike, and Xander with ex-demon Anya) - and with exclusion of Tara's death and Willow's vengeance-hunt - it was a fairly 'normal' relationship. In The Children's Hour, lesbianism is clearly portrayed as evil and a sin, as the lives of the two women accused of being lesbians are devastated by the revelation. It ruins their work and personal lives, and the fact that the children attending their school are taken out, clearly shows society's prejudice against homosexuality at that time. It was a very risqu� subject at the time, even if it isn't so much now. Therefore, although this was a realistic representation of lesbians at the time, it wouldn't be today. In conclusion, it is clear that the Dead/Evil Lesbian Clich� is present in Willow and Tara's relationship. Joss Whedon stated that he had not killed Tara off because she was gay, but that she was simply used a plot device for Willow to become evil. Therefore, Tara was simply introduced into the show with the intention of her being killed and the intention of Willow becoming evil. This reinforces the Dead/Evil Clich� in that all lesbians and lesbian relationships are doomed to end with one partner dying and/or her lover going crazy. Surely then, this must also show that prejudices about homosexuals still remain in today's society, and that although it is more accepted than in the past, it is still not completely acceptable to be homosexual or in a homosexual relationship. ...read more.