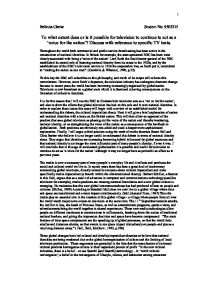 To what extent does or is it possible for television to continue to act as a 'voice for the nation'? Discuss with reference to specific TV texts.

Belinda Clarke Student No: 9505215 To what extent does or is it possible for television to continue to act as a 'voice for the nation'? Discuss with reference to specific TV texts. Throughout the world both commercial and public service broadcasting has been active in the construction of national identities. In Britain for example, the state sponsored BBC has been most closely associated with being a 'voice of the nation'. Lord Reith the first director general of the BBC established its central role of fostering national identity from its outset in the 1920s, and by the establishment of the BBC's television service in 1936 the corporation was, as Reith put it, committed to "making the nation as one man". (Goodwin & Whannel, 1990, p.23) To this day the BBC still subscribes to this philosophy, and much of its output still reflects this commitment. However, since Reith's departure, the television industry has undergone dramatic change because in recent years the world has been becoming increasingly organised by globalisation. Television is now broadcast on a global scale which it is theorised is having consequences on the formation of collective identities. It is for this reason that I will use the BBC to illustrate how television acts as a 'voice for the nation', and also to show the effects that global television has had on this role and in turn national identities. In order to explore these issues this essay will begin with a review of an established model for understanding this debate, the cultural imperialism thesis. Next it will give a brief explanation of nation and national identities with a focus on the British nation. This will then allow an appraisal of the position that sees global television as phasing out the voice of the nation and thereby weakening national identity, or as strengthening the voice of the nation as a consequence of the backlash to globalisation. ...read more.

It follows that a nation is not only a political entity but something which produces meanings- a system of cultural representation."(Hall, 1992, p.292) He illustrates that Britain's national identity is inextricably bound up with issues of race, gender and sexuality. British national identity is represented as southern, white heterosexual masculine and middle class which is unfairly representative of the different genders, sexuality's, ethnicity's and cultures that exist within Britain. It places white English men as the superior race and any one else as the inferior other in varying degrees. In Modernity and its Futures Hall illustrates that continuity, tradition and timelessness are key ingredients in constructing a national identity. Education, national histories, literature, popular culture and more explicitly the media have all become tools of telling the national discourse. "They provide a set of stories, images, landscapes, scenarios, historical events, national symbols and rituals which stand for or represent, the shared experiences, sorrows, triumphs and disasters which give meanings to the nation." (Hall in Hall, Held and McGrew, 1992, p.293) In this process, subjective truths are told in the hope that they will be absorbed. The intention is that the national discourse will be naturalised to establish a general universal truth about the nation. This is the way hegemonic regimes surreptitiously construct and represent common sense understandings of national identity, as though they were an inherent part of humanity. Television (especially public service broadcasting) has been a primary site for the construction and reproduction of the national identity. The BBC in Britain has felt it their duty to unite the nation by fostering a sense of national identity. Consider how many times it displays nationalistic symbols (flags, red roses, lions, and beefeaters) in television programmes. The Union Jack is displayed wherever they cover a sporting event featuring British players. During every football 'World Cup' spectators are seen to wave, wear and paint Union Jacks on their faces whilst singing patriotic songs, such as 'God Save the Queen'. ...read more.

However, this makes a number of key assumptions - firstly that an individual in society has these convictions of belonging to a nation, and secondly that the transfer of information from television will be able to influence an individual's beliefs. The very volume of media images and experiences, to which many societies are now exposed, can lead to an advanced critical faculty in many viewers. They are not just blind consumers, who can be subjected to an "ideology transplant" - rather many are conscious and accustomed of the need to filter messages from the medium and many others will make their own readings, at counterpoint to the inherent western ideologies of global television. Conversely it is also true that for some countries the 'voice of the nation' has become stronger because of a backlash to globalisation and therefore for certain individuals, their national identity can be strengthened. It is also true that alongside national identities being both weakened and strengthened by global television they are also being transformed and new hybrid identities are emerging. The growth in the ability of individuals within society to travel both nationally and internationally, have wider access to information, and to be able to communicate in many new ways, has led to the creation of a myriad of new communities, which can stretch across borders, or be contained as microcosms within them. These can be communities of shared ideology, religious belief, common interest and a thousand other connections - and these hybrid identities often can be as strong if not stronger than an individual's sense of nation. Therefore for those countries who fear that they will lose their national identity, it has and will continue to be useful for television to still act as 'a voice for the nation'. The 'voice of the nation' can also be useful in counteracting the influx of western imported and satellite television images that pervade many countries. However, it may no longer have as powerful or pervasive an effect as in previous years because of the changing nature of collective identity. ...read more.