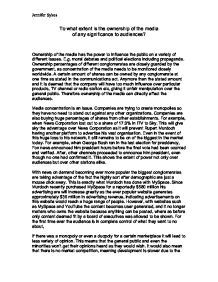 To what extent is the ownership of the media of any significance to audiences?

To what extent is the ownership of the media

of any significance to audiences?

Ownership of the media has the power to influence the public on a variety of different issues. E.g. moral debates and political elections including propaganda. Ownership percentages of different conglomerates are closely guarded by the government, as concentration of the media needs to be monitored closely worldwide. A certain amount of shares can be owned by any conglomerate at one time as stated in the communications act. Anymore than the stated amount and it is deemed that the company will have too much influence over particular products, TV channel or radio station etc, giving it unfair manipulation over the general public. Therefore ownership of the media can directly affect the audiences.

Media concentration is an issue. Companies are trying to create monopolies so they have no need to stand out against any other organizations. Companies are also buying huge percentages of shares from other establishments. For example, when News Corporation lost out to a share of 17.9% in ITV to Sky. This will give sky the advantage over News Corporation as it will prevent Rupert Murdoch having another platform to advertise his vast organisation. Even in the event of this huge loss to his network, it still remains to be on of the biggest in the market today. For example, when George Bush ran in the last election for presidency, Fox news announced him president hours before the final vote had been counted and verified. After, other channels proceeded to announce him president, even though no one had confirmed it. This shows the extent of power not only over audiences but over other stations alike.

With news on demand becoming ever more popular the biggest conglomerates are taking advantage of the fact the highly sort after demographic are just a mouse click away. This is exactly what Murdoch has done with MySpace. Since Murdoch recently purchased MySpace for a reportedly $580 million his advertising are will increase greatly as the ever popular website generates approximately $35 million in advertising revenue, indicating advertisements on this website would reach a huge range of people. However, with websites such as MySpace and YouTube the content becomes user generated, and it no longer matters who owns the website because anything can be posted, where as before only content deemed fit by a board of executives was allowed to be shown. For the first time ever the audience is in complete control of what they want to no about,

If there was a monopoly or even a duopoly for a certain marketplace it will lead to less variety of opinion. This means that the general public and even the minorities won’t get their opinions heard as they would wish. It would also mean that there is no market competition, meaning development is slower due to the fact the organization will have no stimulus to improve their products, channels and such.

Too much concentration of the media can lead to too much of one view point is getting publicized. This can lead to opinions being swayed by bias news reports, for example. When fox news viewers were surveyed alongside viewers from another leading American news channel facts showed that the viewers of Fox news had been seriously mislead when it came to issues with the war in Iraq, George Bush and many other issues. A significantly larger percentage of Fox viewers thought that the government had found weapons of mass destruction in Iraq when compared with other news channel viewers. These scandalous figures proves how much people can be influenced if the right information if it is relayed back to them enough times. If a person was to read a pro-conservative, anti-labour newspaper, their views would become bias towards the conservative party, because they are just reading prejudice opinions about the labour party. This is significant to the audience because it would be unfair for news to be reported only if it fit in with a certain propaganda grouping for example.

News is not always reported as the public may think it is. For example, Fox news’ “fair and balanced” trademark is not strictly true, as it has proved itself not to be on numerous occasions. Controversial issues, such as gay marriages, are often skirted around, where as a case of celebrity marriage is often central news. This is because gay marriage is described by many as a ‘minority’ story. It doesn’t apply to the majority of the population; where as the majority of the audience would be interested in celebrities. This can be due to the ownership of the organisation in question. For example, Rupert Murdoch was proven to have sent memos to senior members of his organisation informing them to only report on news he had approved first. By doing this Murdoch can single out political spokesmen and candidates to make them appear good or bad. It means that Rupert Murdoch controls the news output, controls media content and will not provide an unbiased opinion against everyone. There would be no freedom of speech. Stories would also start to be left outsourced, because they aren’t true. To get around this a very general statement was used, “some people say”. This statement does not give evidence of what will follow and can be used to make up journalism Rupert Murdoch thinks should be shown. By doing this he can make people look stupid, giving a more interesting story. This affects the audience because it does not give an opinion that is the truth as the news should be.

Ownership of the media is extremely significant to the audience. It has the power to persuade and influence mass audiences without direct recognition from the government or any other superpower. It has the power to lie to the audience and suggest things that aren’t true. An only exception would be the new technologies of people being able to choose what they want to watch when they want to watch it i.e. news on demand. In his case, except advertising, the ownership doesn’t matter as the content is user generated.