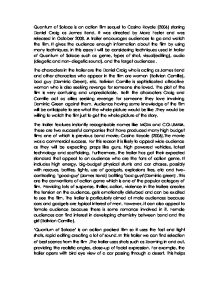 Quantum of Solace is an action film sequel to Casino Royale (2006) starring Daniel Craig as James Bond. It was directed by Marc Foster and was released in October 2008. A trailer encourages audiences to go and watch the film. It gives the audience enough information about the film by using many techniques. In this essay I will be considering techniques used in trailer of Quantum of Solace such as genre, types of shot, visual(editing), audio (diegetic and non- diegetic sound), and the target audiences . The characters in the trailer are the Daniel Craig who is acting as James Bond and other characters who appear in the film are woman (Bolivian Camille), bad guy (Dominic Green), etc. Bolivian Camille is sophisticated attractive woman who is also seeking revenge for someone she loved. The plot of the film is very confusing and unpredictable. Both the characters Craig and Camille act as allies seeking revenge for someone they love involving Dominic Green against them. Audience having some knowledge of the film will be anticipate to see what the whole picture would be like .They would be willing to watch the film just to get the whole picture of the story. ...read more.

However, it can also appeal to female audience because there is some romance involved in it. Female audiences can find interest in developing chemistry between bond and the girl (Bolivian Camille). 'Quantum of Solace' is an action packed film so it uses the fast and tight shots, rapid editing creating a lot of sound. In this trailer we can find selection of best scenes from the film .The trailer uses shots such as Zooming in and out, providing the realistic angles, close-up of facial expression. For example, the trailer opens with bird eye view of a car passing through a desert. This helps provide the audience sense of isolation and establishes settings. Next it is followed by series action shots involving adventures bounded with the great locations, fast cars, big explosions, car crash, gun shots, glass breaking etc . A sequence of rapid shot changes gives an impression of fast, exciting action making it enjoyable. This can possibly draw the audience mind to be interested in the film. Another good example is a scene in the cave where bond confesses about his past. ...read more.

The sound completes visual impact and creates the sense of excitement .Both the diegetic and non-diegetic sound interest the audiences as both sounds particularly create suspense. The trailer has everything from action packed sequences to emotional confession. James Bond has been a brand name since its movie began. Many well known actors such as Pierce Bronson and Sean Connery have played the role of James Bond. Each actor has different acting techniques. For example, the previous James Bond Pierce Brosnan had humour in his way of delivering dialogue and the charm of a womanizer. Compare to him Daniel Craig plays the role more seriously but he has the James Bond type personality. Craig David certainly is a great performer. He as bond is good, violent, and attractive man. He is more suited in that role because of the dramatic plot of the film that involves lots of action scenes. Since, most of the people are much familiar to the James Bond's film and therefore hope the same expectations from the "Quantum of Solace" as well. Furthermore, He has got the remarkable success with the previous film and people quickly accepted him as the new James Bond. This makes the film different and worth watching. ...read more.