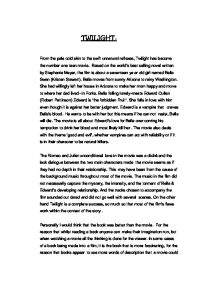 TWILIGHT. From the pale cold skin to the swift unnatural reflexes, Twilight has become the number one teen movie. Based on the world's best selling novel written by Stephanie Meyer, the film is about a seventeen year old girl named Bella Swan (Kristen Stewart). Bella moves from sunny Arizona to rainy Washington. She had willingly left her house in Arizona to make her mom happy and move to where her dad lived- in Forks. Bella felling lonely-meets Edward Cullen (Robert Pattinson).Edward is 'the forbidden Fruit'. She falls in love with him even though it is against her better judgment. Edward is a vampire that craves Bella's blood. He wants to be with her but this means if he can not resist, Bella will die. The movie is all about Edward's love for Bella over coming his temptation to drink her blood and most likely kill her. ...read more.

Personally I would think that the book was better than the movie. For the reason that whilst reading a book anyone can make their imagination run, but when watching a movie all the thinking is done for the viewer. In some cases of a book being made into a film, it is the book that is more fascinating, for the reason that books appear to use more words of description that a movie could not be able to portray. The theme of a love affair between predator and prey, "the lion falling in love with the lamb"[1] (as said in the book), did not get revealed enough in the movie compared to what the book had showed. Twilight had a reasonable story line and it had some action scenes to keep me entertained but I felt it could have had a more spellbinding plot seeing as how the film was about blood thirsty vampires. ...read more.

Overall, I'd have to say that nothing reached 1my expatiations, although nothing was horrible. The film did its job, and there is always room for growth in the next few films that are said to being made (new moon and eclipse). The first in a series isn't always the strongest, and this one provides a decent structure for future events. Film Review Title: Twilight Director: Catherine Hardwicke Cast: Kristen Stewart, Robert Pattinson, Cam Gigandet, Peter Facinelli, Billy Burke, Genre: Romance/Fantasy Runtime: 122 min. Rated: PG - 13 Released: November 21st, 2008 1 'The lion fell in love with the lamb' - book: Stephanie Meyer, Chapter 13- Confessions, page 274. 2 'we were not settled on a specific visual rhythm and the film looks uneven. When we started shooting there were no clear markers on how this film was meant to be structured in terms of cinematography' http://www.anevibe.com/headlines/film-review-twilight.html ?? ?? ?? ?? ...read more.