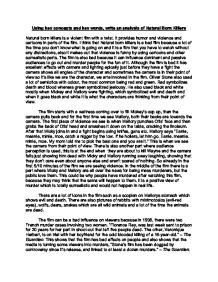 Using key concepts and key words, write an analysis of Natural Born Killers Natural born killers is a violent film with a twist. It provides humor and violence and cartoons in parts of the film. I think that Natural born killers is a bad film because a lot of the time you don't know what is going on and it is a film that you have to watch without any distractions, also it makes out that violence is funny by using cartoons and other surrealistic parts. The film is also bad because it can influence dominant and passive audiences to go out and murder people for the fun of it. Although the film is bad it has excellent effects with camera and lighting epically just before they have a fight the camera shows all angles of the character and sometimes the camera is in their point of view so it's like we are the character, we arte involved in the film. Oliver Stone also used a lot of semiotics with colour, the most common being red and green. Red symbolizes death and blood whereas green symbolized jealousy. He also used black and white mostly when Mickey and Mallory were fighting, which symbolized evil and death and when it goes black and white it is what the characters are thinking from their point of view. ...read more.

"Florence Rey, was last week sent to prison for 20 years for her part in shoot-out that left five people dead. The other, Veronique Herbert, is on trial with her boyfriend for the cold blooded killing of a 16-year-old." - The Guardian. This shows that the film has bad effects on people and also shows that the media is turning some viewers into murders, "Stone's film has been dogged by controversy since it's release, and linked to at least a dozen murders." - The Guardian. This is a classic example of how media turns the public's point of view. It's also a reflection of the media's impact on the violent and criminal aspect of today's society. Natural Born Killers is also reported to be responsible for a spree killing in Germany; 'Reservoir Dogs' has been blamed for attacks against the police; the hardly artistically valid 'Childs Play' was even linked to the murder of British toddler James Bulger. Although the media has blamed violent films for these incidents, there has been no evidence to suggest that violent films were responsible for them. "In the case of the murders in Germany, it was discovered on inspection by more reputable broadsheet newspapers, that the couple in question, so apparently similar to Stones crazed Bonnie and Clyde, merely owned a poster of 'Natural Born Killers'." - taken from http://www.dbspin.com/academic/violence.htm. ...read more.

Natural Born killers wouldn't have been a film that I would have watched by my own choice because it is violent and isn't a film that appeals to be, I think it is aimed at people who like violence but know how to take the information they are receiving without going on to commit what they have just seen. I think it is hard to see whether it is just a violent film or if it has comedy and action in it too. Personally I think it has all three in but is hard to see unless you pay attention to the film. The film is suppose to be violent, yet there is hardly any blood or gore and also some of the swear words are censored which you wouldn't expect for this film. The film also contains a scene which is set as a 1950's sit-com which is totally original for a violent film to have in. Natural born killers has lots of different genres in which makes the film more interesting and unpredictable which is good if you like them kind of films. I think the use of music and lighting (black and white etc) was really good to show the characters emotions unlike any other film I have seen. ...read more.