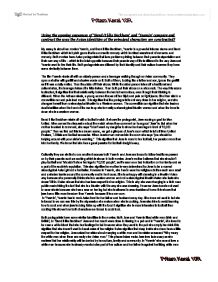 Using the opening sequences of Bend it like Beckham and Yasmin compare and contrast the way the Asian identities of the principal characters are constructed?

Using the opening sequences of 'Bend it like Beckham' and 'Yasmin' compare and contrast the way the Asian identities of the principal characters are constructed? My essay is about two movies Yasmin, and Bend it like Beckham, Yasmin is a powerful intense drama and Bend it like Beckham which is hybrid genre that is a romantic comedy which is mixed assortment of romance and comedy. Both movies have Asian protagonists that face problems picking between their parents expectation and their own way of life - which is the total opposite because their parents way of life is different to the way Jess and Yasmin want to live their life. Both protagonists are different by their identity and their culture however they have some similarity between them. The film Yasmin starts off with an elderly person and a teenager walking through an Asian community. They open a shutter with graffiti and abusive words on it. Both of them, looking like a father and son, ignore the graffiti as if it was a daily matter. Then they take off their shoes. While the elder person takes off a traditional and cultural shoe, the teenager takes off a Nike trainer. Then both put their shoes on a shoe rack. The way this scene is directed, it signifies that their relationship between the two is harmonious, even though their thinking is different. ...read more.

I order to blend; in she lies to her colleagues and tells them that she drinks alcohol. But her attempts go futile. After the twin towers get crashed, the attitude of her colleagues become more challenging for her to blend in. This is because her colleague's stereo typed all Muslims by calling them terrorists. On the other hand, Jess has a conflict with her Asian society. The Western society had accepted her, but her Asian society didn't want her to be accepted by other societies. This is signified when Jess is trying to shoot a goal in the final match, she sees women from her society in the form of the defenders who are trying to stop her succeeding. Both of these points in the movies signify that both have to fight against a society. Yasmin and Jess share many differences as well as similarities. One of the main differences between them is their attitudes towards their religion. Yasmin is a member of a family which is a very strict Muslim family. From the story we can assume that Yasmin's father stands at a higher position in the Mosque and Yasmin's brother is the person who calls all the Muslim's to prayer. This shows the involvement of the family within the local mosque. Yasmin is the only character in the family which is not at all involved within the mosque and religion. ...read more.

In both movies there is conflict between the two protagonists and the dialogue and other signifiers show this in the movie. One protagonist resolved their conflict and the other protagonist didn't. Maybe this is because they believe in different religions and because the Muslim people were treated inadequately because of the attack on the twin towers and maybe because one is a rom-com and the other is a drama. I think this is not fair because different people are treated differently due to their religion. Both movies show this by the signifiers. The opening sequence of the movies, moreover explains the whole movie. The opening sequence reflects the whole movie. The diversity shown in the beginning, is shown to us comes up ahead on the text. Their individual identities are similar in the ways that their parents think; they should be brought up as a true Muslim or a true Sikh. Their dream is shown to us in the opening. In Bend it Like Beckham, Jess playing football and her mum disapproving this tells us that problems will come between the two cultures. Yasmin wearing the Western clothes removing her hijab, at the time of Adhaan tells us about her disapproving her culture and religion. The ending then changes for both. Both of them have a different ending. Yasmin has to sacrifice her dream, while Jess's dream is fulfilled and keeps her parents happy as well. This is how the opening sequence brings the characters in front of us. By ?? ?? ?? ?? ...read more.