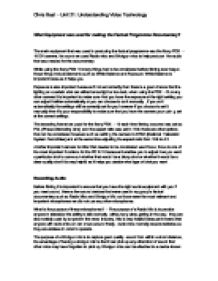 What Equipment was used for making the Factual Programme Documentary? The main equipment that was used in producing the factual programme was the Sony PDX -10 DV camera, for sound we used Radio mics and Shotgun mics to help produce the audio that was needed for the documentary. While using the Sony PDX 10 many things had to be considered before filming even begun, these things include elements such as White Balance and Exposure. White Balance is important because it helps you Exposure is also important because if not set correctly then there is a good chance that the lighting on a certain shot can either be too light or too dark, when using the PDX-10 or any other camera it is important to make sure that you have the exposure at the right setting you can adjust it either automatically or you can choose to do it manually, if you do it automatically the settings will be correctly set for you however if you choose to set it manually then it's your responsibility to make sure that you have the camera your using set at the correct settings. The recording format we used for the Sony PDX - 10 each time filming occurred was set as PAL (Phase Alternating Line) ...read more.

Audio Levels When filming with the PDX-10 or with any other professional camera it is very important to check your audio levels this is because if you have them set too high then the audio will be rather loud and at the same time would also be rather crackling, it is possible to lower the audio level while editing however this may make little or no difference to the clips recorded and could result in those clips having to be reshot in order to get the right audio level. If the audio levels are set too low however then this would also be bad because you will not be able to hear as to what is being said while filming and even while editing there is always the possibility that if you adjust the volume levels to a high level while using Premiere Pro then there is a possibility that you still would not be able to hear as to what is being said on the clip that was filmed and may result in having to reshoot the whole clip all over again just so that you can get the audio and making sure that it is set at the correct level. ...read more.

project as well as the videos would be set at, it could either be DV which is the normal version that is commonly used and doesn't take long to export or it could be in HDV (High Definition Video) which means the finished project could be bigger in file size but would also mean that it would be rendered and displayed in higher quality while at the same time it could take a longer amount of time to export the finished project.l The project itself once edited and completed was exported on Premiere Pro and took around 15-20 minutes to render, the file format that it was rendered in was Quicktime Media as that is the common video player used on Macs, despite this however there are other common formats that the project could have been exported in, these formats could have been WMV (Windows Media Video) AVI, MP4 (Mobile Phone Format), MPEG or even FLV, all these file formats are the most commonly used on not just Macs but also PC's as well this is because they are easily recognised by various media players such as Realplayer or VLC and as a result they can be easily played without any issues. ?? ?? ?? ?? Chris Best - Unit 21: Understanding Video Technology ...read more.