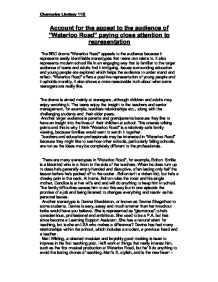 Account for the appeal to the audience of "Waterloo Road" paying close attention to representation The BBC drama "Waterloo Road" appeals to the audience because it represents easily identifiable stereotypes that teens can relate to. It also represents modern school life in an engaging way that is familiar to the target audience of teens and adults find it intriguing. Issues surrounding education and young people are explored which helps the audience to understand and reflect. "Waterloo Road" offers a positive representation of young people and it upholds morality. It also shows a more reasonable truth about what some teenagers are really like. The drama is aimed mainly at teenagers, although children and adults may enjoy watching it. The teens enjoy the insight to the teachers and senior management, for example, teachers relationships etc., along with the challenging students and their older peers. Another target audience is parents and grandparents because they like to have an insight into the lives of their children at school. This creates talking points and this is why I think "Waterloo Road" is a relatively safe family viewing, because families would want to watch it together. Teachers and education professionals may be interested in "Waterloo Road" because they might like to see how other schools, particularly failing schools, are run as the ideas may be completely different to the professionals. ...read more.

Janeece is a bright girl, but laziness and not seeing the point in education caused her to fail her GCSE's. However, former Deputy Head, Andrew Treneman inspired an interest in palaeontology on a school trip to the museum and now she is determined to work hard and make something of herself. Janeece has a heart of gold but a mind as malleable as putty. In a particular episode we watched, Waterloo Road was trying out new initiatives to prepare the students for work. By teaching them how to write a CV and showing them interview skills the school is making education meaningful for the students and also they are learning important life skills. The parent of a student with learning difficulties develops a crush on Davina, which causes nothing but trouble for her. It seems that he has his own emotional problems and Davina is vulnerable to parents' attention. This shows the importance of boundaries in a teaching profession, if the parent had made a formal complaint about Davina she could get in a lot of trouble and even lose her job. While all this is going on the head Rachel Mason is being blackmailed by an entrepreneur, Stuart Hardly, whose bid to build a training centre at Waterloo Road was rejected, and if she didn't help her he threatened to reveal her past which could end her career. ...read more.

just when the head thinks it's all over he comes out with something else for her to do, still threatening to reveal her secret. There are many other storylines that take a turn for the worst, but there are also some which turn out good. "Waterloo Road" is a BBC programme. The BBC has a duty to inform, educate and entertain viewers. It is an impartial, unbiased company and their funds are raised through licensing fees, and because of this they do not need to advertise. The BBC is a Public Service Broadcaster (PSB), so you don't have to pay to watch it as it is subsidised. Writers in "Waterloo Road" have an agenda to promote recent Government initiatives and to show how they work to the public. The easily identifiable stereotypes in "Waterloo Road" appeal to the audience because they can relate to them. It also represents young people in a positive way and the teenagers on the programme reflect how teenagers in the real world are really like. Modern school life in the programme is familiar to the target audience and older people may enjoy watching how teenagers act in schools compared to how they used to act. The issues dealt with in the programme are explored in great depth and require the audience to think. ?? ?? ?? ?? Charmaine Lindsay 11G ...read more.