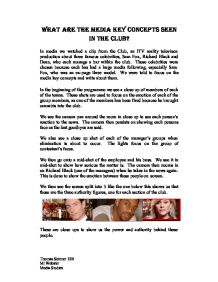 What are the media key concepts seen in The club?

What are the media key concepts seen in the club? In media we watched a clip from the Club, an ITV reality televison production about three famous celebrities, Sam Fox, Richard Black and Dean, who each manage a bar within the club. These celebrities were chosen because each has had a large media following, especially Sam Fox, who was an ex-page three model. We were told to focus on the media key concepts and write about them. In the beginning of the programme we see a close up of members of each of the teams. These shots are used to focus on the emotion of each of the group members, as one of the members has been fired because he brought cannabis into the club. We see the camera pan around the room in close up to see each person's reaction to the news. The camera then persists on showing each persons face as the last goodbyes are said. ...read more.

At the beginning of the clip we see, we are introduced to the characters. This then turns into complications which include one of the members getting fired for drugs, one person gossiping about another, the elimination of a team member and finally climaxes in a major argument, which is then resolved. The audience of this television programme consists of teenagers and young adults who go clubbing in the London area. They have an interest in music, dancing and soft drugs such as alcohol and cannabis. In the club the ideology behind the show is concentrating on young people's interests including sex, clubbing and drinking. It is on ITV because it is a reality TV how which publicises these clubs so they will get more customers. This means that ITV will get a cut of the profits. It has been put on television after the nine o'clock watershed because of its adult content including scenes of nudity, drug taking and violence. ...read more.

We can see this with Lucy as parts of her life inside the club have made her look like a slag, but we do not properly see all of what she has done. This is because this is the way the media chose to portray her. It does not necessarily give a balanced pictured of her. They have emphasised parts of her character to appeal to the viewers. Towards the end of the clip, we see an argument build up between Lucy and one of the other staff as he has been spreading untrue gossip about her and Stretch. She confronted him and he said that he saw something happen between her and Stretch. This built into a climax when they both screamed at each other. This reality TV programme shows the audience that even reality shows can be created to fulfil the media stereotype of selection, omission and emphasis thereby increasing the rating,which in turn would increase profits for the TV company. Thomas Skinner 12B Mr Webster Media Studies ...read more.