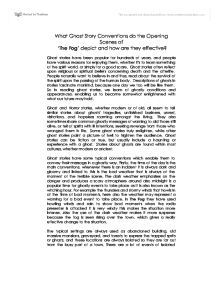 What Ghost Story Conventions do the Opening Scenes of The Fog depict and how are they effective?

What Ghost Story Conventions do the Opening Scenes of 'The Fog' depict and how are they effective? Ghost stories have been popular for hundreds of years, and people have various reasons for enjoying them, whether it's to learn something of the spirit world, or simply for a good scare. Ghost stories often reflect upon religious or spiritual beliefs concerning death and the afterlife. People naturally want to believe in and thus, read about the survival of the spirit upon the passing of the human body. Descriptions of ghosts in stories fascinate mankind, because one day we too will be like them. So in reading ghost stories, we learn of ghostly conditions and appearances, enabling us to become somewhat enlightened with what our future may hold. Ghost and Horror stories, whether modern or of old, all seem to tell similar stories about ghosts' tragedies, unfinished business, unrest, visitations, and hopeless roaming amongst the living. They also sometimes share common ghostly messages of warning to aid those still alive, or tell of spirits with ill intentions, seeking revenge from those who wronged them in life. Some ghost stories truly enlighten, while other ghost stories paint a picture of hell to frighten the audience. Ghost stories can be fiction or true, but usually include a haunting or experience with a ghost. ...read more.

Blue can represent death; for example when the fishermen are attacked the film colour turn blue to show the death scene. Abrupt shock is also a vital convention which gives a sudden shock to the audience, for example in the beginning of the film; there is a small ancient watch is swinging left to right and Mr Machen suddenly grabs the watch, Additionally the horns that go of at the garage randomly, these are all the main conventions that are included in every ghost story. Three recent ghost films were '1408', 2007 by Mikael Hafstrom, 'The Exorcism of Emily Rose' 2005 by Scott Derrickson and 'Riding the Bullet' 2004 by Mick Garris. John Carpenter has created some of the most intense, imaginative, influential and successful horror films in cinema history. Consider for example Halloween (1978), one of the most profitable independent films ever made. In order to enhance the realism of the narrative, Carpenter uses very simple camera setups and elegant composition, john carpenter is a very important director for the horror and ghost industry because he directed films within the town centre and made them with an unrevealing twists, some of his films are, 'Ghosts of Mars' 2001 and 'Vampires' 1998. On the other hand John Carpenter is a horror film director so he made a ghost film also. ...read more.

Also the use of mechanical breakdown at the moment of horror, this is shown in the film when Stevie Wayne is being attacked and she broadcasts on the radio for anyone to save her son who is at home, Nick and Elizabeth hear this and they head toward her house and rescue her son, at that moment when the zombie is approaching them, the tyres refuse to move out of a big hole of mud, as the zombie get closer they manage to get the car out. This increases the audience suspense. All the conventions mentioned have been introduced in the film and they have been clearly shown in the film e.g. Abrupt Shocks, Isolated Locations, Setting, Time of the Day and other mentioned above. In the next few scenes I assume that the Zombies are going to be stopped by some cause like the discovery of the journal that Father Malone found with that they could maybe get some hints to what will happen next and give the crew anything they were particular after to save the town. For a modern audience I would change the way the attacks were shown, I'd like to show them n full contexts for the audience to experience the entire mood. I would also change the weather of the bad moments to torrential rain and thunder, to emphasis the terrible condition of the situation. -''Sania Shafiq,, - ...read more.