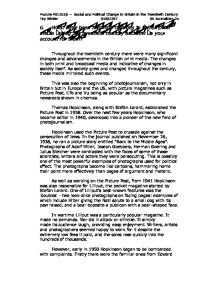 What have been the main changes to British print media during the twentieth century and how do you account for them?

6. What have been the main changes to British print media during the twentieth century and how do you account for them? Throughout the twentieth century there were many significant changes and advancements in the British print media. The changes in both print and broadcast media and indicative of changes in society itself. As society grew and changed throughout the century, these media mirrored such events. This was also the beginning of photojournalism, not only in Britain but in Europe and the US, with picture magazines such as Picture Post, Life and Vu being as popular as the documentary newsreels shown in cinemas. Thomas Hopkinson, along with Stefan Lorant, established the Picture Post in 1938. Over the next few years Hopkinson, who became editor in 1940, developed into a pioneer of the new field of photojournalism. Hopkinson used the Picture Post to crusade against the persecution of Jews. In the journal published on November 26, 1938, he ran a picture story entitled "Back to the Middle Ages". Photographs of Adolf Hitler, Joseph Goebbels, Herman Goering and Julius Steicher were contrasted with the faces of some of those scientists, writers and actors they were persecuting. This is possibly one of the most powerful examples of photographs used for political effect. ...read more.

The Mirror was the first morning daily picture paper. Henry Hamilton Fyfe also experimented with using different types of photographs on the front-page. On April 2, 1904, the Daily Mirror published a whole page of pictures of Edward VII and his children, Henry, Albert and Mary. This was a great success and Harmsworth now realised the British public had an intense interest in photographs of the Royal Family. In August 1905, the Daily Mirror began to pioneer the idea of the "exclusive". The first example was the "exclusive" interview with Lord Minto, the new Viceroy of India. This approach was popular and later that year the circulation of the Daily Mirror had reached 350,000. Despite the success of the Daily Mirror, Alfred Harmsworth was more interested in his other newspapers, The Times and the Daily Mail. In January 1914 he sold the newspaper to his brother, Harold Harmsworth, now Lord Rothermere. During the First World War, the Daily Mirror became the most popular newspaper on the Western Front. The soldiers particularly liked the fact that the newspaper included so many pictures of life back home. The Daily Mirror also published pictures of the war, the most dramatic example of which was probably the German daylight air raid over London in 1917. Lord Rothermere sold his shares in the Daily Mirror in 1931. ...read more.

with a list of non-negotiable demands. On 24th January 1986 some 6000 British Trade Unionists went on strike after months of protracted negotiation with their employers, News International and Times Group Newspapers. The company management was seeking a legally binding agreement at their new plant in Wapping, which incorporated flexible working, a no-strike clause, new technology and the abandonment of the closed shop. Immediately after the strike was announced, all those taking part in the industrial action were dismissed. The company replaced the workforce and transferred its four major titles, the Times, the Sunday Times, the Sun and the News of the World, to the Wapping plant. In support of their dismissed members, the print unions organised regular marches and demonstrations at the company's premises. They also called for a boycott of the four newspapers involved. As the dispute gathered momentum a large-scale police operation was launched to ensure the Wapping plant could operate effectively. In 1987 the strike finally collapsed. With it the restrictive trade union practices associated with the traditional Fleet Street publishing empires also collapsed and the Trade Union movement in Britain was irrevocably changed. So, it is clear that there have been many significant changes to British print media throughout the twentieth century. These have occurred under the extreme circumstances of war, political revolution and technological expansion and have had noteworthy ramifications for modern society. ...read more.