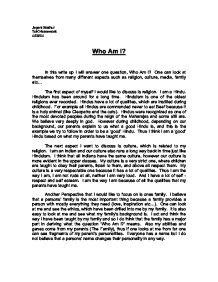 Jayant Mathur ToK Homework 4/09/04 Who Am I? In this write up I will answer one question, Who Am I? One can look at themselves from many different aspects such as religion, culture, media, family etc... The first aspect of myself I would like to discuss is religion. I am a Hindu. Hinduism has been around for a long time. Hinduism is one of the oldest religions ever recorded. Hindus have a lot of qualities, which are instilled during childhood. For example all Hindus are commanded never to eat Beef because it is a holy animal (like Cleopatra and the cats). Hindus were recognized as one of the most devoted peoples during the reign of the Maharajas and some still are. We believe very deeply in god. However during childhood, depending on our background, our parents explain to us what a good Hindu is, and this is the example we try to follow in order to be a 'good' Hindu. Thus I think I am a 'good' Hindu based on what my parents have taught me. The next aspect I want to discuss is culture, which is related to my religion. ...read more.

I act and think the way I have been taught by my family and so I do think that the family has a major part in deriving what the question 'Who Am I?' means. Also my abilities and genes come from my parents (The Family), thus if one looks at me from far one can see fragments of my parent's personalities. Everyone has a name but I do not believe that a persons' name changes their personality in any way. Jayant Mathur Another viewpoint of myself is from the media aspect. I prefer to wear baggy clothes chiefly because I prefer wearing them because they are comfortable for me. However my clothing is related to the music I listen to which is mainly Hip-Hop and Rap. Thus you could say that I act the way some singers and rappers act. My character is partly influenced by that (the music I listen too). It does not have too great an influence on me, but it does have an influence on me nonetheless. Also the media and advertisement influence some of the material possessions that I would like to have such as a mini Ipod or a new computer game. ...read more.

Personally I don't think there is a 'real me' because I do not interact with myself and so I would not know the complete 'real me'. I know part of the 'real me' for example what kind of music and clothes I like. However the rest of the 'real me' is behind a shroud. It is a mystery to everyone including me (which indeed is quite a daunting thought). I would also like to talk about a dramatic life experience, which I endured and which I know has changed me. Roughly a year ago I lost a very dear friend. Before she passed I thought friends were just friends and that they were nothing great. It was not such a big deal for me to have friends because I figured that everyone had them. But after she passed I realized the value of a friend and because of this I hold my friends very close to me because they are very dear to me. On the next page I have made a chart, which shows how everything I have talked about is related to one thing: my character. Everything I have talked about makes up most of my character. The chart that I have made will help me to explain that. Jayant Mathur ...read more.