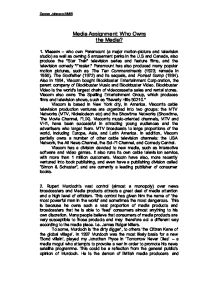 Who Owns the Media?

Media Assignment: Who Owns the Media? 1. Viacom - who own Paramount (a major motion-picture and television studio) as well as owning 5 amusement parks in the U.S and Canada, also produce the "Star Trek" television series and feature films, and the television comedy "Frasier." Paramount has also produced many popular motion pictures, such as The Ten Commandments (1923; remade in 1956), The Godfather (1972) and its sequels, and Forrest Gump (1994). Also in 1994, Viacom bought Blockbuster Entertainment Corporation, the parent company of Blockbuster Music and Blockbuster Video. Blockbuster Video is the world's largest chain of videocassette sales and rental stores. Viacom also owns The Spelling Entertainment Group, which produces films and television shows, such as "Beverly Hills 90210." Viacom is based in New York city, in America. Viacom's cable television production ventures are organized into two groups: the MTV Networks (MTV, Nickelodeon etc) and the Showtime Networks (Showtime, The Movie Channel, FLIX). ...read more.

This could be a reflection from the general public's opinion of Murdoch. He is the demon of British media producers and consumers alike. There is evidence to suggest that he has had a considerable effect upon the media environment. But in fairness, people do sometimes blame him as a crude response to a complex situation. He can be used as a 'scapegoat'. He has also pioneered satellite-based television broadcasting. An advantage to the consumers of the media products from Murdoch could be that he has a fairly high standard (in most cases) of broadcasting which appeal to mass audiences e.g. BSkyB. The Sunday Times and the Sun are skillfully produced newspapers, which lead their markets as much because of the sensational stories (usually inaccurate or exaggerated) or low price. Murdoch is skilled at buying new companies to win market share, even if it means selling a business in order to raise cash or move to more profitable markets. ...read more.

Granada Creative is ITV's largest producer and is one of the most prolific commercial television programme producers in Europe. It sells programmes to more than 120 different countries worldwide and makes nearly 9,000 hours of original programmes each year across a range of genres and for all platforms, including digital, satellite, cable and terrestrial. Granada's productions for ITV include a number of the UK's most popular and successful television programmes, including Coronation Street, Emmerdale, Heartbeat, Blind Date, A Touch of Frost, This Morning, The South Bank Show, Stars in their Eyes and Popstars, Trisha, Where The Heart Is, Without Motive. Granada Broadcasting is the home for all Granada's free-to-air broadcast activity, including management of the seven ITV franchises it owns, Granada Television, London Weekend Television, Yorkshire Television, Tyne Tees Television, Anglia Television, Meridian Broadcasting and Border Television all their regional programming and the key relationship with the ITV Network Centre. Granada is the UK's leading commercial broadcaster accounting for �1billion of ITV's advertising revenue - nearly a third of the total UK television. Darren Johnson SMW ...read more.