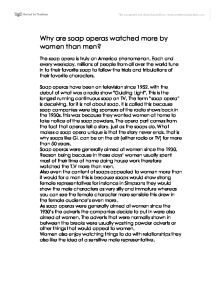 Why are soap operas watched more by women than men?

Why are soap operas watched more by women than men? The soap opera is truly an America phenomenon. Each and every weekday, millions of people from all over the world tune in to their favorite soap to follow the trials and tribulations of their favorite characters. Soap operas have been on television since 1952, with the debut of what was a radio show "Guiding Light". This is the longest running continuous soap on TV. The term "soap opera" is deceiving, for it is not about soap, It is called this because soap companies were big sponsors of the radio shows back in the 1930s, this was because they wanted women at home to take notice of the soap powders. ...read more.

Soap operas were generally aimed at women since the 1930. Reason being because in those days' women usually spent most of their time at home doing house work therefore watched the T.V more than men. Also even the content of soaps appealed to women more than it would for a man this is because soaps would show strong female representatives for instance in Simpsons they would show the male characters as very silly and immature whereas you can see the female character more sensible this drew in the female audience's even more. ...read more.

A typical soap Opera setting would most like be along the lines of , Some women slept with her close friends husband , a car crash or someone's lost their job ect. These topics would most probably appeal to women because it's very realistic and it could be happing in their own life as well. Also women like the idea of knowing about someone else's life it gives them something to talk about. These are some of the reasons for which I believe that soap operas are watched more by women rather than men. Because the storylines, adverts and characters are more appealing to a female audience rather than a male one. ...read more.