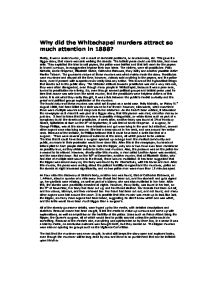 Why did the Whitechapel murders attract so much attention in 1888? Firstly, it was a serial murder, not a result of domestic problems, or drunkenness, etc. This gave it a bigger story, that noone was safe walking the streets. The tabloid press could use this idea, bad news sells. They exploited the idea to sell papers, the police were baffled and that left room for the papers to invent rumours, to exaggerated impose their own ideas. The victims, were all prostitutes: Polly Nicholls, Annie Chapman, Elizabeth Stride, Catherine Eddowes, Mary Kelly and another possible victim Martha Tabram. The gruesome nature of these murders was what mainly made the story. Prostitutes were murdered and abused all the time, however, nobody said anything in the papers, and the police force, even if present with suspects never really took any action. This is one of the hypocritical things that stands out in the public story. The Victorian attitude towards prostitutes was not a very nice one, they were often disregarded, even though many people in Whitechapel, because it was a poor area, turned to prostitution for a living. ...read more.

A surgeon, Dr George Phillips, was at the scene. Here intestines and gut were lying in the yard but attached, several other organs were also lying around. She had a deep wound in her neck, and was around her entire neck. Because of the incision, Dr Phillips believed that it could have been a knife like that of a surgeon. There were several pieces of evidence at the scene, all which proved to be useless. The idea that it could have been a surgeon sparked up outrage from the medical community and public, as noone in their profession would have done this. After this in the newspaper, hundreds of letters piled in from people claiming to be Jack the Ripper, only one or two have ever been considered as possibly true, as they obtain evidence to the next murders. Also, the pressure was on the police for a reward to be offered. However, shortly after this murder, a man called Leather Apron was arrested, and the case died down. ...read more.

It is possible that this murder was made up to look like Jack the Ripper, as many more organs had been taken, suggesting he didn't know which one was which, and the knife would have been much bigger than a surgeon's. All of the already gruesome details, were hyped up by the media, with detailed descriptions and sketches. Because noone had been caught, it left the media to make up rumours and come up with explanations, as well as empathize on the inability of the police. Ideas such as Prince Albert being the Ripper, the Queen's surgeon, all of which would lead to public scandal unless the police could do something. Because of the media's role, everything was opinionated on by them too, in a sense it was a trial by media, no conclusive evidence was brought forth, but they carried on. The Ripper murders were also an opening for groups such as the Vigilance Committee. The fact that the murderer was never caught, is what still keeps the story open and explored today, even though the murderer will be long dead by now and there is no punishment that can be inflicted upon him/her. ...read more.