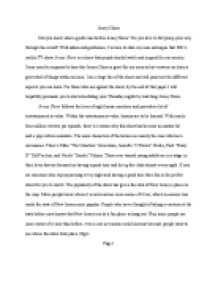 ﻿Jersey Shore Did you know what a guido was before Jersey Shore? Do you love to fist pump your way through the crowd? Well ladies and gentlemen, I?m here to state my case and argue that Mtv?s reality TV show Jersey Shore is a show that people should watch and is good for our society. Some may be surprised to hear that Jersey Shore is great for our society but viewers can learn a great deal of things within an hour. I am a huge fan of the show and will point out the different aspects you can learn. For those who are against the show, by the end of this paper I will hopefully persuade you to start scheduling your Thursday nights by watching Jersey Shore. Jersey Shore follows the lives of eight house members and provides a lot of entertainment in value. Within the entertainment value, lessons are to be learned. With nearly four million viewers per episode, there?s a reason why this show has become an instant hit and a pop culture sensation. The main characters of the house are mainly the ones who have nicknames. There?s Mike ?The Situation? Sorrentino, Jennifer ?J-Woww? Farley, Paul ?Pauly D? DelVecchio, and Nicole ?Snooki? Polizzi. These over tanned young adults are in a stage in their lives that are focused on having a good time and hit up the clubs almost every night. ...read more.

Like I learned in my Sociology 110 class, people need a purpose in life, and work will bring the best out of them. Why do you think businessmen are so successful in our society? Because they all have a great social skill, which is why they?re ranked high in society. Another highlight of this reality TV show is the drama that goes on in the house. People love drama and Jersey Shore gives you exactly what you want to see. In season one, on the very first episode, the housemates are just getting to know each other. Two characters in particular, Ronnie and Sammie, develop a strong liking for each other and create a relationship. But soon find themselves fighting and throwing each other clothes out of the room. Even their own roommates, who've had plenty of their own drama, seemed disturbed by the vicious name-calling, violent room-trashing and overt attempts to make each other jealous that happened a night before at a club. It?s a moment like this where you as the viewer are watching the episode and are sick of their feuding relationship, yet you can?t stop watching because you want more drama. They soon find themselves making up in the end by Sammie leaving the house. Another example occurred in the recent season three. Nicole ?Snooki? Polizzi was intoxicated on the beach and started causing havoc in public, which ended up getting herself arrested by the police. "She didn't hurt anyone or get in a fight," says a source. ...read more.

She explains that one time she was in a bar and a guy walked by and said, 'You are everything that is wrong with this country today,'" she recalls. She then stated, "There's the economy, poverty, equal rights - and Jersey Shore is the worst thing?" (Free) Snooki insisted that the housemates don't just party all the time. She quotes, ?I?ll go to frickin? Barnes & Nobles, get a coffee and just sit down and read. No one would ever think that. We have different sides to us.? Yes, these amateur actors get paid to party and live in a house given to them so obviously they come off as irresponsible and less intelligent than others but ask yourself this?do you really the know the characters? So the overall question, why should you watch the show? One word: entertainment! You may not have anything in common with the Jersey Shore characters but you will enjoy the characters, you will be entertained and you will laugh. You will have a great time while relaxing and watching something a little less serious. I hope I persuaded you to watch Jersey Shore and Page 5 schedule your Thursday nights from now on. And now with season four premiering this summer on August 4th, I know what I?ll be doing on my Thursday nights. It?s a show that?s impacted with drama and gives you a break from your own reality to watch someone else?s life. As soon as you watch the show and adopt their life lessons, soon our society will be strong in all aspects of life. ...read more.