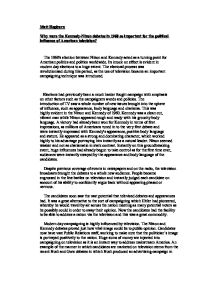 Why were the Kennedy-Nixon debates in 1960 so important for the political influence of American television?

Matt Hepburn Why were the Kennedy-Nixon debates in 1960 so important for the political influence of American television? The 1960's election between Nixon and Kennedy acted as a turning point for American politics and politics worldwide. Its knock on effect is evident in modern day elections to a huge extent. The electoral process was revolutionised during this period, as the use of television became an important campaigning technique was introduced. Elections had previously been a much harder fought campaign with emphasis on other factors such as the campaigners words and policies. The introduction of TV saw a whole number of new issues brought into the sphere of influence, such as appearance, body language and charisma. This was highly evident in the Nixon and Kennedy of 1960. Kennedy was a clean cut, vibrant man while Nixon appeared rough and ready with his grouchy body language. A victory had already been won for Kennedy in terms of first impressions, as millions of Americans tuned in to the very first debate and were instantly impressed with Kennedy's appearance, positive body language and stature. ...read more.

An example of the manner in which candidates are marketed on television stems from the recent Bush and Gore debates in which Bush produced an advertising campaign in Spanish, solely for the purpose of appealing to the minority groups of America and hoping to win their votes. It also portrayed Bush as a man who was in touch with the 'melting pot' society of America and in touch with the minorities too. This was a valuable piece of propaganda to the way in which the election panned out, as Bush became popular with the Hispanic community. This clearly indicates the modern day significance that television has on the electoral process. It emphasised exactly how a candidate is able to manipulate an audience through means of organised, televised campaigning. It was a highly tactical method of gaining votes from the Hispanic community, while also boosting the public image of Bush as a man who cares for all aspects of American society. ...read more.

The actual election is televised all through the night with various count ups from the electoral colleges and states across America, with the winner being announced at the end of the evening. This provides the nation with a minute-by-minute insight into how the election is being run. The debates of 1960 proved to be a huge turning point in the way in which American debates and politics in general were conducted. The television coverage revolutionised the profile and nature of politicians forever. Daily bulletins from the President are instantly accessible via any news network and the stature and role of the job has extended beyond just a chair in office due to this fact. The President's role is now seen to be highly influential and powerful, with the ability to address a nation at his will. Television has changed the face of American politics immensely and has had a visible knock on effect across the world, with such media coverage being adopted on a global scale. It has raised the profile of politics to a great extent and has made it easily accessible to the general public, while also acting as a positive means of campaigning for politicians. ...read more.