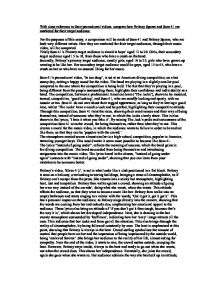 With close reference to their promotional videos, compare how Britney Spears and Sum 41 are marketed for their target audience.

With close reference to their promotional videos, compare how Britney Spears and Sum 41 are marketed for their target audience. For the purposes of this essay, a comparison will be made of Sum 41 and Britney Spears, who are both very different artists. How they are marketed for their target audiences, through their music video, will be compared. Firstly Sum 41's Primary target audience is aimed at boys' aged 13 to 20. Girls, their secondary target audience aged 15 to 18, from those who have a crush on the band. Secondly, Britney's primary target audience, mostly girls, aged 16 to 25, girls who have grown up wanting to be like her. Her secondary target audience would be guys, aged 15 to 45, who have a crush on her or who have an unusual liking for her music. Sum 41's promotional video, 'In too deep', is set at an American diving competition, on a hot sunny day, setting a happy mood for the video. The band are playing in a slightly smaller pool compared to the one where the competition is being held. ...read more.

She returns into a sticky hot atmosphere, highlighting heat, lust and temptation. Britney then walks against a crowd, showing an attitude of going her own way instead of the crowds', doing what she wants, when she wants. This attitude affects the audience, so that they want to become more like her. Britney then walks into an empty bathroom and starts singing to a mirror with the words, 'Get it get it, get it get it'. This has a personal impact on the audience, as Brtiney sings directly into the camera, showing that the words are coming from her and nobody else, emphasising her emotional appeal to the audience. These lyrics also bring an attitude of 'if you don't get it then tough, because that's the way it is', which shows her developed independence. Next, she is dancing in the hot sweaty atmosphere surrounded by 'buff men', indicating how her 'sexy' image attracts all the men. This indicates that her looks and fame get all the attention. This also brings through the reality of claustrophobia, by being followed constantly by men. The heat is emphasised at this point, showing that Britney is always in the heat. ...read more.

The types of audience they are appealing to are slightly different. The Britney fans are more long standing and she has to adapt to a maturing audience, whilst Sum 41 fans are being targeted to the cool and 'chilled out', appealing to the creative, slightly rebellious young person who likes to go against the crowd. Both artists give the impression that they do not care what people think to their audience, Sum 41 are leading their audience to them with their trend and attitude, whilst Britney is trying to change the minds of her target audience and steer them to a different way of thinking. One is rebelling against the expectations of a rule keeping diving competition; the other is trying to change the audience's impressions and expectations, in order to keep them intrigued and buying her music. In conclusion, the two videos are marketed for two very different target audiences. Their different audiences are attracted to either Britney or Sum 41 because it appeals to them in a way that it relates to their lives. Whether it's the image, the lyrics or the looks that attracts a fan to the music video the video caters for different music genres. ...read more.