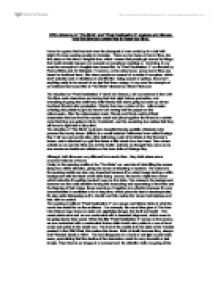 With reference to The Birds and Final Destination 3 analyse and discuss how the directors create fear in these two films.

With reference to "The Birds" and "Final Destination 3" analyse and discuss how the directors create fear in these two films. Horror is a genre that has had even the strongest of men curled up in a ball with fright; it's been scaring people for decades. There are two types of horror films, the first plays on the idea of tangible fear, which means that people get scared by things that could actually happen, for example an aeroplane crashing or drowning. In my case the example of a tangible fear based film is "Final Destination 3" co-directed by Penny Gibbs and Art Schaefer. However, on the other hand, some horror films are based on irrational fears, like when people are scared of zombies & vampires which don't actually exist or situations in real life like being scared of spiders, there isn't anything really to be scared of we just find them creepy. In my case the example of an irrational fear based film is "The Birds" directed by Alfred Hitchcock. The storyline for "Final Destination 3" starts at a theme park somewhere in the USA. ...read more.

and goes down the hole marked 'death'. As the ball-bearing goes through the hole, the camera cuts smoothly to three students on a ride. In "The Birds" there are many dark scenes throughout the film, which add mystery because you can never tell if there when there is going to be an attack, Hitchcock also uses music and loud sound effect to make the audience jump or shock them, because the storyline is so strong that you are engrossed and even if you watch it several times you still get shocked. In "Final Destination 3" there are many clich� features, which basically means a feature of a film that becomes over used. At the start of "Final Destination 3" in Wendy's vision, there are over exaggerated creaking and groaning sounds coming from the rollercoaster and close up shots of oil leaking from the hydraulics. There is lots of red throughout which symbolises, the devil and death, there is also lots of signs pointing to death for example, when the ride "high dive" goes up you slowly see the 'v' in 'dive' flicker off to change it to "high die". ...read more.

We are then transported 5 months later where all the people who have skipped out on fate are on a train, Wendy has another 'vision' but this time is not lucky enough to save them and teaches us that we can not skip out on fate. Personally, I don't like horror films that much because I have a very over active imagination so over think things much like Wendy in "Final Destination 3" which is why I preferred it to "The Birds" as I could relate to the character a lot more. I also liked "Final Destination 3" because of the use of the one song 'Turn Around, Look At Me" is used because it creates tension because you know something is going to happen when you hear that song being played. I think the main reason why I didn't enjoy watching "The Birds" is purely because it is dated now, it doesn't have the same effects on an audience as it did when it first came out due to an advance in technology and effects used on films now a days. However, "The Birds" has a very good plot so maybe if it is re-made I may enjoy it then but for the time being I much prefer "Final Destination 3". ...read more.